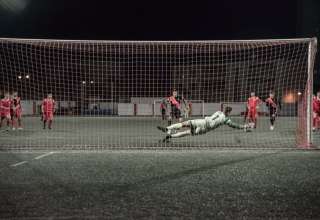 Will Sykes in action

So, you’re in your first season with a new club. The manager has worked with you in the past, and signed you because he believes in your ability. You get the starting keeper’s job.

But the season doesn’t go so well for the team, and the manager quits halfway through the season. The man who believed in you is gone. And, with his departure, so is the guarantee of your place to live. You’re in a foreign country, still looking to get into games, but also need to find a place to stay.

Welcome to the world of Canadian goalkeeper Will Sykes, who began last season as the No. 1 keeper for Europa Point FC in Gibraltar’s top flight. He finished the season as the back-up for Lincoln Red Imps, the team that famously beat Celtic in the home leg of a 2016 Champions League qualifying round tie.

Sykes is currently hanging out in nearby Malaga, Spain, waiting for the start of Red Imps’ training camp. But he’s already let the club know he’d like to move on.

“I personally would like to look elsewhere, only because, as good as the team was, backing up meant that it wasn’t as good a year as it could have been,” he said. “Playing games is why we do this. I am going to try and look elsewhere and find a team where I can go and play and have at least the second spot or be able to work my way up. The team I’m on now, the starting guy they have (Spaniard Raul Navas) has been there for a few years now, and has cemented himself so well that it’s hard to bump him.

“It’s in the back of their heads, too, because they have a young prospect they’re taking care of. I sort of took his spot when I came into Lincoln halfway through the year. But they’ve brought him back in and they’re looking to develop him further.”

OK, so let’s back up a bit. How does a kid from Edmonton make the move to playing soccer in Gibraltar, with a population of less than 40,000?

Sykes was a self-admitted late bloomer in the game of soccer; but he played at Southwest United, one of the city’s most famous youth programs, in his late teens. He wanted to see how far he could go as a keeper, so, a couple of years ago he agreed to go to an academy in Malaga, Spain. He spent a season in Malaga, and played against U19 sides from Granada CF and Cadiz. He did well enough to earn a couple of trials with Spanish sides, but didn’t stick.

“I was the lost Canadian kid who didn’t speak Spanish,” he recalled.

So, he went back to Malaga for a second year, and it was announced that an affiliation was going to be made between that academy and Europa Point, recently promoted to Gibraltar’s top flight. There would be job opportunities for players; and the man who oversaw the academy, George Jermy, would take over as Europa Point’s manager.

Sykes was signed and won the starting job at Europa Point.

And what’s it like to play in Gibraltar’s top league?

“Only because the place is so small, it depends a lot on who’s actually playing and what sort of match it is,” said Sykes. “If it’s a league game between two mid-table teams, you’d be lucky to get 100 people there to watch. If it’s the cup final between Lincoln and Europa, the main stand’s full and the overflow stands are nearly full, near 3,000 would be there to watch. Through the standard year, it’s pretty lacklustre.” As well, because Gibraltar is a small territory that is only a short way away from Malaga, Seville and Cadiz, La Liga’s pull is massive.

But, despite high hopes, Europa Point FC sunk right to the bottom of the table. So, halfway during the season, Jermy pulled the chute. He quit, and Sykes, one of the former manager’s prize signings, was in limbo. The accommodations he was promised were gone. So, he found a place to stay in Malaga, about a three-hour bus ride from Gibraltar. The drive itself is actually much shorter, but buses don’t always take the shortest route from point A to point B.

Being away from Gibraltar, Sykes couldn’t train regularly. Meanwhile, new players were being brought in. But he was able to get into games, and he showed well enough in a match against Lincoln to pique the Red Imps’ interest. He was transferred a day before the window closed. He spent the rest of the season as a back-up, and is desperate to get another shot to be a No. 1.

So where to, next?

“I’m not really picky about where I play,” said Sykes “I quite enjoy the travel and I don’t mind getting to know a new area. North America would be great and, if I had the chance, I’d probably take that over anything. It’s a lot closer to home… I’d love to play back in Edmonton, really. Maybe that time will come, but now they have such a strong set of goalkeepers at the moment.”

And he’s excited by news that a Canadian Premier League is in the works.

“100 per cent,” he said. “Once the Canadian league gets going it would definitely be an interest of mine. It would be great to play in Canada at a respectable level.”

But, for now, he waits out the situation with the Red Imps.