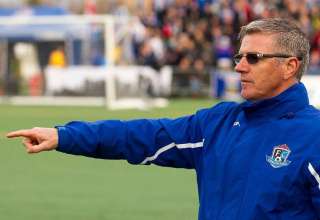 When the New York Cosmos gave FC Edmonton’s front office an 11th-hour phone call, asking of last weekend’s match could be moved to later in the season, it was a blessing in disguise. The Cosmos needed to free the date so the team could travel to Saudi Arabia for a friendly.

The Eddies were going through a real rough patch; they’d won just one of their first seven games, and were eliminated from the Canadian Championship by the Ottawa Fury.

So, the extra week off gave the Eddies a chance to hit the restart button on their season. At least, that’s how the team sees it as it prepares for a visit from the Indy Eleven.

“We’ve been consistent and very good in training since we had the break,” said Eddies coach Colin Miller, who said that he’s been stressing the team’s attacking posture in the past week of training. The Eddies have scored just three times in seven games.

“It (the break) came at a really good time for us, with the Cosmos asking us to switch the game. We agreed to it, for sure. It gave us a chance to work on one or two different aspects of the game. The intrasquad we had last week, there were some great attacking movements… There’s a feel-good factor here at the moment, and we just have to make sure we carry this forward.”

“It was good to slow down a bit and focus a bit more on training, which I think we did,” said defender Adam Straith. “The last two weeks, we had an intrasquad and a good team dinner, which was nice. It was good to take the foot off the game pedal, so to speak. It was nice to focus on training and get another crack at it on Saturday.”

The Eleven got to the NASL championship game last year after beating the Eddies at the semifinal stage. But, like the Eddies, they’ve defied expectations this season — for many of te wrong reasons. Indy has yet to win a game this season. The Eleven come to Clarke Field on Saturday night.

“I look at the qualities they have, and I think we’re both in false positions in the league,” said Miller.

On Thursday morning, before the team trained at Clarke Field, Miller showed the team a rather unpleasant video.

“Believe it or not, I actually showed the players a video of every goal we’ve conceded. I did that for a reason, because not one of those goals were we carved up or were they wonder goals other than (North Carolina FC’s) Lance Laing’s free kick. A lot of the goals have been self-inflicted.”

They also looked at the chances they created — many of them going wanting.

“We looked at some of the good football that we’ve played,” said Miller. “Because we have played some good football this season. It hasn’t been all doom and gloom by any stretch of the the imagination. So I’m hoping these messages, all these positive messages we’re sending to the players, I’m hoping that will come to fruition.”

The Eddies front office says that less than 400 tickets are left for Saturday’s game. Clarke’s sell-out number is 4,096 spectators.