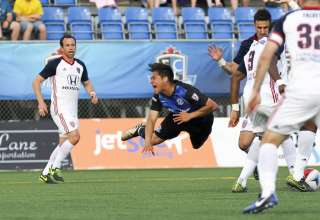 Dustin Corea goes down in the box.

The official number for a sellout at Clarke Field is 4,096.

And, no, don’t adjust your set, that was the number announced. And this wasn’t a case of padding numbers; the stands were full. A beautiful Saturday night, a (finally!) full stadium, lots of energy in the park. It made what was a heck of an interesting game between the Indy Eleven and FC Edmonton almost secondary.

Finally, Edmonton showed that it can be a soccer city. The moving of the games to Saturday nights has seen attendances rise. A promotion that saw Canadian national-team hero Diana Matheson appear at the game, and giving pregame instruction to dozens upon dozens of girls soccer players, only increased the family-fun, festival atmosphere.

Mother nature finally cooperated. There was no snow. No giant windstorm. No Biblical downpour.

Maybe this Saturday night was the night soccer finally arrived in Edmonton. Maybe tonight will go down as the first building block towards a larger stadium — one which would have the capacity to allow the Eddies to at least break even. And for the 4,096 in attendance, they witnessed the Eddies win for just the second time in eight NASL matches, as they trumped the winless  Indy Eleven by a 2-1 score.

To think, just last autumn, the Eddies and Indy met in the NASL semifinals.

“We had an Indy side that’s not the same Indy as last year and we just had to come out and take advantage of that,” said FCE’s Dustin Corea, who had a goal and set up Adam Straith’s first-ever NASL goal. “We had a meeting, talked amongst each other, just let each other know that no matter what we’re always here for each other and that everybody is equal. It doesn’t matter, we’re going to pick each other up, the good times and the bad times. And, this time, we showed character.”

The game turned on a penalty call from referee Dave Gantar halfway through the first half. Centre back Pape Diakite hoofed to ball up the right side, and Dean Shiels did well to recover it before the ball could go into touch. He turned and played a great ball into the Indy penalty area for Dustin Corea, who then went down awkwardly in the area. Gantar pointed to spot, calling Indy defender Kwame Watson-Siriboe for the trip. Indy Eleven coach Tim Hankinson saw the replay on the giant Titan video screen, and was incensed.

Then, Corea stepped up, and drove a shot off the crossbar. But Gantar spotted two Eleven players encroaching in the area, and ordered a retake. The second time, Corea made no mistake.

“It was a dive,” Hankinson fumed. And he said allowing the retake was “high-school stuff.”

Hankinson accused Gantar of “putting his personality” into the match; that is, he made the game all about him.

Eddies coach Colin Miller had this to say about the call: “I didn’t actually see it. I asked Jeff (assistant coach Jeff Paulus) and the guys and they thought maybe, maybe not. I’ll take it. I don’t give a toss how the ball goes in the back of the net. I’ll take it all day long.”

There was no controversy about the Eddies second goal. Corea swung in a picture-perfect free kick that Straith headed downward and across the goal line.

The Eddies controlled the match until the very late stages of the game. Indy pressed hard in the final 15 minutes, and was rewarded in the 80th. Substitute Jason Plumhoff, who the Eddies traded away to Jacksonville in 2016,  got a measure of revenge on his former team. Justin Braun nodded a ball into Plumhoff’s path. Both Diakite and his central-defence partner, Albert Watson, went to Braun, giving Plumhoff a clear path to smash home a half-volley.

Just seconds later, Indy’s Ben Speas crashed a shot off the bar, coming within centimetres of drawing the game level.

Corea would strike a left-footed effort off the post late in the game. On a normal FCE night, Corea would get the game ball. But in this case, for getting that sellout, maybe that ball, ahem, needs to go to general manager Jay Ball — for working tirelessly to get games moved away from the Sunday afternoon dead zone; for engaging with Edmonton’s soccer community; and, for getting those bums into the seats.

I’ve covered the Eddies since 2011, been close to this organization for a long time, and Saturday night felt very different. Now, to see if it’s a blip, or the beginning of something special.