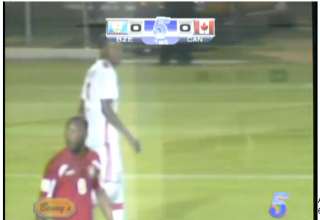 The stream: It was a nice idea, but the execution... not so much.

Sometimes, actually, a lot of the time, we take soccer far too seriously. And we forget what it’s about — to bring people together to support something that’s bigger than themselves.

And Tuesday night was a perfect example of how soccer can build a community. Canada took a 3-0 lead into the second leg of its CONCACAF third-round World Cup qualifier. But, with no TV deal in Canada, and no international feed, Canadian fans had to stream Channel 5 Belize’s feed. At times, it went scrambly like when you used to try and watch Superchannel when you were a kid — even though your parents were too cheap to pay for it.

But the best part of it was the colour commentary from the Maestro and the play-by-play work from his partner. Mad Bull, two man who never met a metaphor they didn’t like. And, even though Canada started off sluggishly, Canadian fans could ignore the quality of the soccer, and make the surreal viewing experience the focus of their chat.

We were all too busy having fun to be worked up about the 1-1 result from the second leg, which will see Canada move into the next group stage.

Even when Belize took the second-leg lead with a goal from Deon “The Killer, the Assassin” McCaulay, we had the cushion of the big lead. But, as Belize improved, so did Maestro and Mad Bull’s commentary. The Jaguars were on the prowl in the jungle; their shark teeth ready to but the Maple Leaf.

They warned Belizeans about the threat of Canadian midfielder “Angry Will Johnson,” a “bully” who has “been angry for two years.” And, Johnson equalized on a “mean cannon shot,” giving Canada a 4-1 lead on aggregate, just before halftime. It came after the Jaguars absolutely bungled how to defend a throw in, refusing to simply get the ball out of danger with time running out in the half.

I didn’t know Johnson had been angry for that long.

Former Atlanta Silverback McCaulay, though, was elevated to true hero status. We were reminded he “was the top scorer in all the Americas.” When he got the ball, he “played like a true champion.” As Belize pressed, showing an attacking side we didn’t see in Canada. we were told that “it’s a different taste, it’s a different food that we are eating.” Based on the excitement generated every time McCauley got the ball, you’d trade every Designated Player in history to get The Assassin into MLS.

McCaulay had two great chances to give Belize a consolation second-leg victory, but was denied each time by Canadian keeper Milan Borjan. The first time, Canadian defender left a back pass to his keeper too short. Or, in Mad Bull-ese, “he underestimated the killer, the assassin.” But Borjan was able to block McCaulay’s attempt. And, right before the whistle, Borjan made an outstanding leaping stop to deny McCaulay’s point-blank header.

Sure, we could analyze the fact that semi pros from Belize carried the play for long stretches of the second leg. We could talk even more about Canadian national-team coach Benito Floro’s decision to leave Jonathan Osorio at home. But that can wait till tomorrow.

Because, tonight, the Canadian soccer community got to swap stories and simply enjoy ourselves, all thanks to patchy feed from Belize Channel 5. Instead of being about Xs and Os, it was 90 minutes of exaggeration, bravado and excitement. I could laugh while I watched soccer. We were told “You’re getting it live from Channel 5! You can’t complain!”

Only the most miserable of souls would.