June 19, 2021
9 New Articles
Home Women's Soccer More Women's Soccer Loss to Brazil a sign of things to come for Canada… if Sinclair continues to be only offensive option 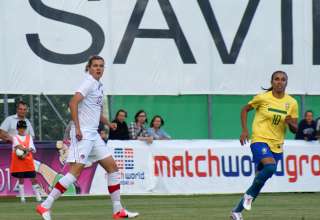 Canada’s Christine Sinclair set a new national record for goals in a season, but Big Red lost 2-1 to Brazil in the finale of the Matchworld Women’s Cup after a frantic exchange of stoppage-time goals.

After Formiga scored the opener off a Marta corner kick, Brazil looked destined to take the 1-0 win despite some decent surges by the Canadians. But the game, held Tuesday in Switzerland, exploded three minutes in stoppage time.

Sinclair was able to get to a loose ball in the Brazilian penalty area — and scored her 17th goal of the season for Canada. But, off the ensuing kickoff, Brazil went down the field, and Grazielle was able to divert a ball from Marta past Canadian keeper Karina LeBlanc for the last-gasp winner.

In the end, the result means little to Canada — as this was the team’s final tune-up ahead of the London Olympics. But, this game showed exactly what kind of fate awaits Canada in the U.K. if Sinclair continues to be the lone source of the team’s goals.

Sinclair can score a goal a game, but it might not be enough. The difference from Canada going out in the group stage to Canada going deep into the tournament will be Big Red’s ability to find secondary scoring.

In his most recent conference call with the Canadian media, coach John Herdman said that the team was working on building its confidence — and its teamwork — so that it could find ways to score if Sinclair was being heavily marked, rested or (knock on wood) injured.

But the facts haven’t shown that to be the case. While Sinclair has scored 17 times in less than a year for Canada, she still isn’t getting the support she needs if Big Red is to challenge for podium in London.

So, when Canada has to play three group-stage games in six days in the U.K. — two of them against teams ranked higher than Big Red — Sinclair may not get needed rest. Herdman may not have the luxury to allow her to get rest against the so-thought soft touch of the group, South Africa.