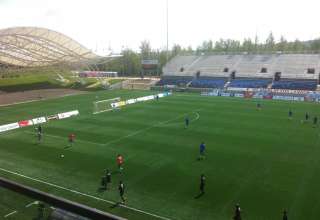 Last season, FC Edmonton held two of its NASL “home” matches in the Fort McMurray at the new SMS Equipment Stadium, a 5,500-seat venue that can be expanded to hold 15,000.

The facility was almost overwhelming; set in a wonderful island park, next to a state-of-the-art recreation centre and sporting complex, it would arguably the nicest stadium in NASL if it was used regularly. In fact, there were more than a few on social media who championed the idea of using Fort Mac as a venue for a Canadian national-team home match.

Now, less than a year later, it’s difficult to comprehend that much of Fort McMurray has been destroyed by out-of-control wildfires. A city of more than 80,000 that hosted NASL and Canadian Football League games last year has seen its population scattered throughout Alberta. Many don’t know if their homes are still standing. What they do know is that the fire continues to grow.

Sitting in a window seat on a flight into Fort McMurray, you will see nothing but forest on approach. It is incredibly lush. And, in the distance, you’ll see a city that’s basically carved out of the bush. And, I have to admit, quite cynically, that the thought of “what if this place was hit by a forest fire?’ did cross my mind as the plane made its approach. I quickly put that out of my mind.And it needs to be noted that the Fath family, which owns FC Edmonton, also has business interests in the Fort McMurray area. The Fath Group owns a camp in nearby Anzac, which is under fire threat.

FC Edmonton will be hosting food drives for displaced Fort McMurray residents at its next two home games. In partnership with Canada Soccer, Alberta Soccer, the Edmonton Minor Soccer Association and the Edmonton Food Bank, the Eddies will be collecting food donations at the May 11 Amway Canadian Championship game against Ottawa and the May 15 NASL game against the Cosmos.

“The Wood Buffalo community welcomed our club with open arms last season,” FC Edmonton general manager Jay Ball stated in a release. “Our ‘Footie for Fort McMurray’ campaign will allow both our club and fans to return the kindness that was shown to us during our two matches last season. It is FC Edmonton’s hope that ‘Footie for Fort McMurray’ will help draw attention and support for our neighbours to the north in this time of need.”

If you can’t make it out to the games, CLICK here to support the Canadian Red Cross.