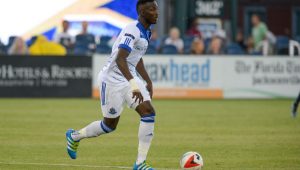 After Diakite won the ball, two Armada players lay crumpled on the ground.

It is becoming clearer with every FC Edmonton match that Diakite is a real diamond-in-the-rough signing for the Eddies. He may be one of the meanest tacklers NASL has ever seen. He’s dominant in the air. He’s unorthodox at times, but he’s an absolute shutdown defender.

And, on Wednesday, he could celebrate his first-ever NASL goal, a volley off a Pablo Cruz corner that gave the Eddies a 1-0 win on the road over the Jacksonville Armada.

The Eddies now have won two in a row and have seven points through five matches.

Diakite is represented by Alex Bunbury, the former striker who teamed for years with Eddies coach Colin Miller. Bunbury recommended Diakite so highly, and because Bunbury and Miller have a relationship that stretches back years, there was an unusually high level of trust between coach and agent.

“If he keeps his discipline, the way he’s playing for us right now, he can do some very good things,” said Miller. “It took him some time to settle in, but if he can keep his feet on the ground, he can be a big part of the team. He was in Scandinavia, he could have signed for a bigger team there, but Alex felt that he could really develop here.”

Miller said that, on the way to the Community First Park in Jacksonville, Diakite and fellow central defender Albert Watson were ribbing each other; Watson had noted that, in their scoring race, he was up 1-0 on Diakite on the basis of his match-winner against Ottawa two Sundays ago. At the end of the game, Diakite noted that the two were now even.

The Armada may have enjoyed more than 60 per cent of the ball, but created precious little going forward. It took 50 minutes for Eddies keeper Matt VanOekel to be even troubled wth having to make a save — and that came off a rather timid effort fro Armada fullback Matt Bahner.

The Eddies got the best chance of the first half, a shot from teenage Canadian Shamit Shome that grazed the outside of the goalpost. Shome got a start, while Jason Plumhoff and Cruz got into the starting eleven as the Eddies were carrying a short squad because of injuries and Sainey Nyassi’s unavailability because of his scheduling conflict with a U.S. immigration appointment.

The Eddies started the game with just three subs available on the bench — and that included back-up keeper Nathan Ingham. Mallan Roberts was listed as a fourth player on the bench, but was really unavailable because of injury.

And the Eddies’ shortened squad was called upon just six minutes into the game, when midfielder Cristian Raudales had to leave the game with a calf injury.

Miller called the field conditions in Jacksonville “the worst it’s been. We weren’t even allowed to warm up in certain areas of it.”

Miller said three quarters of the field was in perfect condition, but about a quarter of the field, which has new grass over the baseball diamond, had plenty of seams. It was uneven. And it was pockmarked with dead spots.

The coach said Raudales landed on one of the seams; fears were that he’d reinjured his ankle, but he’ll be sent back to Edmonton to have his calf examined.

On the bright side, the Eddies should welcome back midfielders Nyassi and Dustin Corea for Saturday’s game against the Indy Eleven, while striker Tomi Ameobi is questionable.