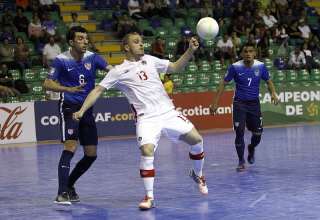 Robert Renaud in action against the United States.

The series between Canada and the United States played out like David and Goliath, after all.

David felled the mighty beast; And, Thursday, a Canadian national futsal team made up mostly of amateurs from Ontario and Quebec felled an American side filled with professionals. Thanks to a Robert Renaud hat trick, Canada beat the American 5-3 in Costa Rica Thursday, which gave our national side a 9-7 edge in the two-game aggregate series.

Ian Bennett, one of just three Canadian indoor pros (he plays arena soccer with the Milwaukee Wave of the MASL) on the national-team roster, scored in both legs, as did Nazim Belgendouz, who played for FC Montreal in 2015.

By eliminating the United States, advances to the CONCACAF Futsal Championship, and will face Costa Rica, Curacao and Cuba in Group B action. (Though, really, it should be Group C, shouldn’t it?) The CONCACAF playdowns act as qualifiers for the Futsal World Cup.

But, let’s be honest — Canada would have gone into this series as heavy underdogs. And, in the first game, the Canadians were down 3-0 before rallying. After the Americans took a big lead, the Canadians outscored them 9-4 through what was left of the first leg and the entirety of the second leg. So, not only was this a major upset — but one that required a stirring comeback.

Ontario and Quebec have developed amateur futsal programs, and the core of the team comes from those circuits. Hopefully, Canada’s success against the Americans will spur other regions to do more when it comes to futsal — even though the indoor game with boards tends to be the winter game of choice.