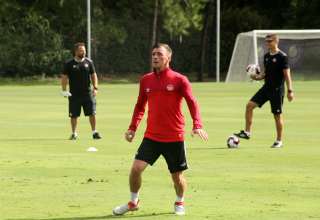 Nik Ledgerwood says he’s in the same position as many of his Canadian national-teammates. They’re all waiting to hear if the Canadian Soccer Association will opt to part ways with coach Benito Floro — or if they’ll keep him on.

There certainly is a lot of criticism about Floro’s game management — like bringing on defenders when the team needs goals. There’s criticism about his roster selection — like leaving Will Johnson off the team for the last two games of this cycle’s qualifying campaign.

Ledgerwood, who scored in Canada’s 3-1 win over El Salvador Tuesday that only served as a consolation for a team that couldn’t catch Honduras for second spot in their qualifying group, said Floro’s future is not an easy thing to consider.

Ledgerwood said that Floro has had a positive impact on his career. He said that Floro is a great teacher — and that he’s helped many Canadian players develop. And he said that, whether Floro is the team’s coach or not, what the Spaniard has taught the players over the last three years will benefit the Canadian national team down the road.

“I enjoyed having him as a head coach, I learned a lot from him. He gave me the trust as a player to be there. So, I’ll never take that away from him.

“He spent hours with us on tactics on a lot of stuff that maybe we didn’t see the way he saw it. Different views of the games, educating a lot of younger players about the game, and not just on the field; a lot of video stuff, a lot of analysis stuff, that I think is going to help us in the long run.”

“I actually think he epitomizes everything that we look for here at FC Edmonton, in terms of his work rate, the aggression and passion that he showed for the Canadian jersey on Tuesday night, the same way he does for FC Edmonton,” said Miller. “I think those things are benchmarks that we have to have in Canada.”