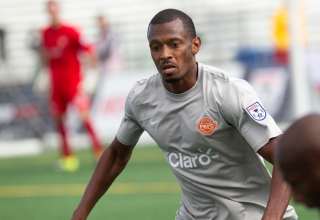 The NASL has concluded its investigation into Puerto Rico FC midfielder Chris Nurse’s claim that FC Edmonton’s Nico Di Biase uttered a racial slur in Spanish during an Aug. 28 game at Clarke Field.

The league began its investigation the day after the match. It released it’s findings on Wednesday — and announced it could not find evidence to corroborate Nurse’s claims.

Here is the statement:

“Following a claim that a racist comment was made by one player to another player in a match between Puerto Rico FC and FC Edmonton on August 28, the NASL immediately opened a formal investigation, at the request of Puerto Rico FC, that included one-on-one interviews with players from both clubs, as well as the centre referee.

“While the NASL in no way questions the validity of the claim, upon finishing its in-depth investigation, the league was not able to find conclusive evidence to corroborate the claim. Although the investigation proved to be inconclusive, the NASL approaches issues of racism, homophobia, and other forms of prejudice with the utmost sensitivity, and in no way tolerates discriminatory behavior of any kind.”

The incident happened late in the second half, just as referee Yusri Rudolf showed a red card to FCE’s Sainey Nyassi for allegedly stamping on PRFC’s Ramon Soria. The players converged, and Nurse said that in the scrum he heard Di Biase utter a racial slur.

Rudolf, like all referees for NASL matches held on Canadian soil, was assigned by the Canadian Soccer Association, not PRO (which administers the refs for games in the United States). On his bio, it states that Rudolf is fluent in English and French.

In the wake of the NASL’s announcement, Nurse said the league must review the way it handles claims of racism.

“Hopefully something positive can come out of this, there needs to be a review on how these cases are handled,” Nurse stated in a message. “There needs to be clear education for all on what is acceptable language and what is unacceptable. There needs to be a protocol for referees when instances like these are bought to their attention both during and after games.  And, lastly, we need to stop hiding from racism and pretending it does not exist. If we want to eradicate it, then brushing it under the carpet or just moving on does not have that effect.”

“What’s happens next time a situation like this arises is the question. Will the failure of reprimand, players are more likely to take matters into their own hands.”