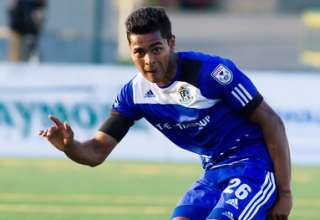 Miami FC was the team that spoiled FC Edmonton’s attempt to win the NASL’s spring-season title.

The Eddies finished just a point behind the spring-season champion Indy Eleven. But, the Eddies’ challenge came to an end in the second-last week of their spring schedule; the Eddies lost 1-0 at Miami. It would be last-place Miami’s only win of the spring season.

Had the Eddies took care of business against the bottom team, everyone else in NASL would already be fretting about how cold it will get for a playoff game in November.

Since then, Miami FC has spent seven digits to overhaul its roster, and is nowhere close to the team it was in the spring season. Meanwhile, FC Edmonton are just three points behind the New York Cosmos for the NASL fall season lead, but the Eddies have two games in hand.

So, when the Eddies host Miami on Sunday, there’s a lot on the line. The Eddies need points to keep up with the Cosmos, and they also have, ahem, payback in mind.

“We want to kind of get our revenge for that,” said FCE midfielder Shamit Shome, who just returned to Edmonton after being in Costa Rica with the Canadian U-20 team. “They’ve got a good team coming down. But we know what we can do, and I’m sure we will be able to get the result against them.”

The Eddies were back at work Thursday after getting most of the week off after last Friday’s 2-2 draw in Ottawa. The game against Miami is the beginning of a three-games-in-one-week stretch that will go a long way to determining who will win the fall-season title. The Eddies host Miami Sunday, then make up one of those games in hand when Rayo OKC comes to Edmonton Wednesday. The Eddies then fly east to face the New York Cosmos next Saturday, which is a game many in NASL are already looking forward to. If the Eddies can win in New York, they’d sweep the three-game season series with the Cosmos.

Miller said that his squad is healthy ahead of this huge week. The only question is midfielder Nik Ledgerwood, who just returned after two World Cup qualifiers with Canada. He will be assessed on Saturday.

“I’m delighted that everyone is back fit and healthy, because the timing couldn’t be any better,” said Miller. “We’ll take it one game at a time and we will address every game one game at a time. Some guys may be tired from Sunday and may not be as fresh as we’d like for Wednesday — and then we’ll take a look at Saturday. But we have a squad that’s good enough to be able to do that now. There won’t be seven or eight changes for every game. That would be crazy to do that. But we will assess every player after every game.”