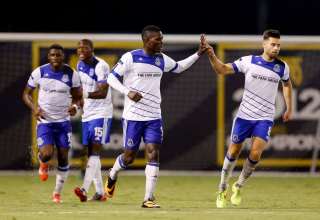 Midfielder Lance Laing says that he’s hopeful that he can play in FC Edmonton’s NASL fall-season opener before he needs to report back to the Jamaican national side.

Laing is supposed to leave for Los Angeles on Sunday to join the Jamaican national side ahead of the Gold Cup. But he’s hopeful he can leave after the Eddies play the San Antonio Scorpions in Fort McMurray. Laing had four goals and four assists in the spring season — and if voting were taken for league MVP at this moment in time, he’d be in the race. He just returned to Edmonton after playing three Copa America matches with the Jamaican national side.

Laing said that the Jamaican team is allowing its MLS-based players to participate in this weekend’s league play, and then leave to report to the national side. He hopes to get the same dispensation so he can play in his NASL game. The Jamaicans play their first Gold Cup match on July 8.

While Laing is hopeful to be an Eddie on Sunday, he knows that the Jamaica call-ups, plus his excellent play in NASL and against MLS opposition in the Amway Canadian Championships, has raised his profile. What does that mean for his future? His contract with the Eddies is up at the end of the year.

“We will see what will happen,” said Laing. “I know the club is doing its best to keep me here.”

But he admitted he “doesn’t know what is going to happen” and that he hopes “the solution will be beneficial to both myself and the club.”

Laing said that FIFA rules allow players to start contacting other clubs when they have six months or less remaining on their contracts. He says that, even though he thinks the option is open to him, he has not contacted other teams.

As for the Copa America, which included a game against Lionel Messi and his Argentine side, Laing called it “the best experience of my life.”

“I would not turn that opportunity down if I ever got the chance to play in a tournament like that again.”

And, he admitted that in that Argentina game, it took a few minutes for him to accept that, yes, it was really happening.

“For the first 20 minutes I was like, I was in awe. I was thinking, ‘is this real?’ I was playing against (Pablo) Zabaleta, from Manchester City and, of course, Messi, from Barcelona. It was amazing.”

And he joked that he didn’t chase Messi all of the time. “There were times when I had him playing back towards his goal!”