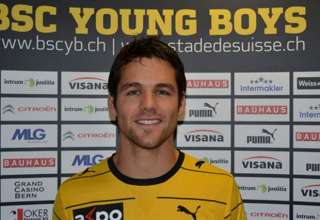 UPDATE: SHORTLY AFTER THIS STORY WAS POSTED, BSC YOUNG BOYS ANNOUNCED THAT SIMPSON IS JOINING THE CLUB, ON A CONTRACT THAT RUNS UNTIL JUNE 2015.

Canadian midfielder Josh Simpson is fielding offers from teams in Switzerland, Germany and Turkey, according to his agent.

In an e-mail sent to The 11, Simpson’s agent, Dr. Andreas Kirsch, said the cancellation of Simpson’s contract with Turkish side Manisaspor was done after close consultation with FIFA.

Manisaspor threatened legal action against the Canadian national-team regular after he and his agent initiated the termination of his contract with the club. But, if Simpson does have FIFA’s blessing, it’s hard to see how Manisaspor could find any legal remedy.

In fact, Dr. Kirsch stated that Simpson launched a case with FIFA against Manisaspor in August 2011 over alleged missed payments to the midfielder.

What’s interesting is that in September, Simpson made himself available to Canadian journalists, and the only mention he made about not getting paid was because of the delay to the start of the regular season. So, he and his agent were filing the claim with FIFA, but Simpson was still putting a brave face on the situation.

“The club missed a final deadline on Monday to pay, so on Tuesday we cancelled, in close teamwork with FIFA, his contract,” wrote Dr. Kirsch. “Josh is now, regarding FIFA, transfer free and will sign a new contract in this transfer window. He has offers from several teams in Germany, Switzerland and Turkey.”

Turkey would be an interesting choice, considering Simpson left Manisaspor because of alleged missed payments. His former teammate at Manisaspor, Mike Klukowski, previously left another Turkish side, Ankaragucu, over unpaid wages. The start of the Turkish season was delayed by a match-fixing scandal.

Switzerland’s reputation has also been damaged. In 2010, nine players were sanctioned for their role in Swiss match-fixing. Sion was tossed from the Europa League over allegations it violated its transfer-window ban. It was also penalized heavily in domestic competition. And the Swiss league just tossed Neuchatel Xamax from the competition, alleging that the club submitted a falsified bank guarantee.

And, what’s interesting is that, if Simpson has been battling Manisaspor since August, he went through all of Canada’s recent World Cup qualifying games — and Turkish league matches — with this weight on his shoulders, yet was one of Canada’s best players through the first round of CONCACAF playdowns.