May 16, 2022
9 New Articles
Home Canadian Premier League CanPL News and Notes From YBB to Pacific FC; Simpson and Silberbauer back together again 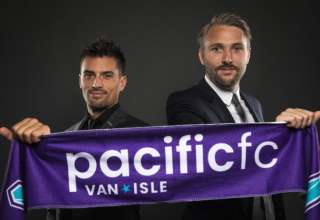 Now, fast forward to the present, as now-Pacific FC President Simpson is at a podium in Langford, B.C., introducing Silberbauer as the first head coach in the new Canadian Premier League team’s history. British Columbian James Merriman, former residency coach with the Whitecaps, will be Silberbauer’s assistant.

Simpson called Silberbauer, who is the first foreigner to get a head coaching job in the CanPL, a “shooting star.” CEO Rob Friend said that the club went through more than 100 candidates for the job before settling on the Dane, who has 25 caps for his national side and won three domestic titles with Copenhagen.

Silberbauer said the existing relationship with Simpson was a big factor in him taking the job.

“It’s important, for sure, that this came from someone you can trust, who you don’t have to background check at all. I know what he’s about, and when he talks, I listen.”

Friend said that the club was looking for a coach who possessed the technical foundation to support the growth of the game locally, but also had a global perspective.

Silberbauer was relegated to working with U21 team when he was at YBB. He first saw it, of course, as a demotion, a signal that his skills had waned. But, something funny happened; he was energized by the passion of the kids who were willing to fight tooth and nail to make it to the first team. He became a mentor, and some of those kids went on to be Swiss champions; others went to the Bundesliga and the Premier League. And he recognized that he absolutely loved coaching.

He is currently an assistant at Luzern and will finish the current Swiss league season with the club. He will take over at Pacific FC once that contract expires.

But he said he relishes what is a “unique” opportunity in the Canadian Premier League. Usually, when a coach gets a job, he inherits players and systems from a previous regime. It can take years before a new coach can turn over things to the point where he can say the club is truly his. In CanPL, though, Silberbauer has the chance to work with a blank slate,

But, he said he is not the type of coach to impose systems on a team, then try to force players to fit into previously defined tactical roles. He will learn from his players, learn what they can do, and then work with systems that bring the best out of them.

“There is no point in asking a player to do something he cannot do,” he said.

As the first non-Canadian to be named as a CanPL head coach, I asked Silberbauer if there was any extra pressure on him. He didn’t think so.

“I think all of the new coaches, we’re in the same boat.”