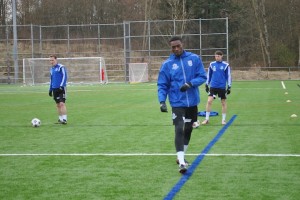 Tomi Ameobi trains with the Eddies in Vancouver.

And, while the two players wore different colours, there was definitely some mutual admiration.

When the chance came for Ameobi to get a trial with FC Edmonton, Jonke told coach Colin Miller that the English striker would be a good fit with the club. And, on Monday, Ameobi’s trial turned into a contract, as he fills the last international spot on the Eddies’ roster.

Jonke signed with the Eddies late in 2013. Now, his former rival has followed him from Finland to the Alberta capital.

Miller said the fact that both Jonke and midfielder Mike Banner — who also played with FF Jaro — vouched for Ameobi meant a lot. When players are willing to endorse their peers, coaches listen.

“He’s going to be a good signing for us,” said Miller. “We had Frank and Daryl (Fordyce) at striker, but the only option after that is Sadi Jalali, who is a very promising young player. We could also move Horace James, with his speed, up front. But Tomi is very god with the ball at his feet and he can do a good job keeping us in possession.”

If Jonke and Ameobi play together up top, it gives the Eddies a twin-tower attack, with two players who can act as true target men. The two are expected to play together on Tuesday, when the Eddies meet the Vancouver Whitecaps in a friendly at the University of British Columbia’s Thunderbird Stadium.

Ameobi found out he’d get the chance to trial with the Eddies just two days before the team left for a nearly month-long training camp in Vancouver. He had to get his things together, fly to Edmonton, and joined the team just in time to get on a 12-hours bus ride out to the British Columbia coast.

“I was really looking forward to getting my first training session in,” says Ameobi. “I had head a lot of good things about the league (NASL). Last year, a lot of the guys I played with had also played in this league, and they raved about it. They said it was an up-and-coming league. It’s a good standard of football and you also get the chance to travel across North America. So I knew if the opportunity came, I would snap it up.”

Ameobi is the younger brother of Shola Ameobi, who has made more than 300 appearances in a Newcastle United shirt. Sammy Ameobi, the third of the brothers, has played more than 25 times for Newcastle.

But Tomi left England to make his fortune playing in northern Europe. Before going to Finland, he’d spent a few seasons in Iceland. So, the cooler Edmonton climate shouldn’t bother him at all. And he said that it’s “inspiring” to be on the same team as Jonke.

“When I played against him last year, he was basically the best target striker in our league. He was a handful for centre halves. When I had to come back for corners, I made sure I was nowhere near him!”