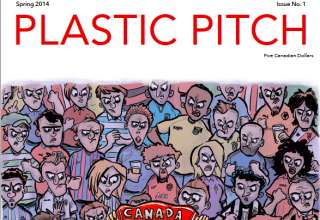 The release of Plastic Pitch is complete.

Late Thursday night, we got word from Apple and our developer, MAZ Digital, that the magazine is now live for iPhone and iPad. It’s already available to Android users through Google Play and Amazon, so the rollout is now 100 per cent done.

For those who subscribed through our Kickstarter campaign, your e-mail address is key to unlocking your subscription. Thank you!

Inside, you’ll find a chance to win one of three Canadian national-team jerseys, courtesy of Umbro Canada.

And why should you pick up the first issue? From looking at Canadians in NASL to the BMO Field controversy in Toronto, we’re providing a comprehensive guide to soccer in Canada — through storytelling. No filler. No season previews or match previews or predictions or lists or power rankings, the kind of content that’s made just for the sake of creating content.

Here’s what you’ll find inside!

• An in-depth look at Dejan Jakovic and his move to Japan’s Shimizu S-Pulse
• A one-on-one with new Whitecaps’ coach Carl Robinson
• A look at the future of BMO Field; we talk to experts in Houston, which has a shared-use facility, and get former Toronto mayor David Miller’s reaction to the coming conversion of the national soccer stadium
• A look at former NCAA star Jordan Ongaro and his search for a pro club
• An in-depth survey of agents across North America; do they think MLS is headed for a labour stoppage in 2015? Do better contracts from NASL shake MLS? What are the advantages and disadvantages of playing in MLS over Europe?
• A look at the minutes played by Canadians in MLS from 1996-2013; after peaking in 2009, the minutes have been plummeting league wide. What will stem the tide?
• A close-up of Selenia Iacchelli, the former Canadian youth star who then had to wait till she turned 27 to make her senior women’s national-team debut
• Will Hanson Boakai leave FC Edmonton for Fortuna Düsseldorf?
• PEI-raised midfielder Mozzi Gyorio on his return to NASL, and the loss of his brother
• Drew Beckie on his decision to come back to the Ottawa Fury
• Plus, Hate the Ball, great illustrations, exclusive photo shoots, general irreverence and a look at how grassroots team can “Play Better,” raising funds for charity by working on their core soccer skills.

There’s also great art, from photographer Matthew Van Deventer, and illustrators James Grasdal and Charlene Chua. It’s part of our commitment to make Plastic Pitch a complete magazine, where art and words marry on the pages.

It would be impossible to imagine a bug-free launch, though. So, if you have any issues, please e-mail us at teamworkpress@rogers.com or comment below.

As well, help us spread the word. Let your friends know about the mag. Feel free to tell us what you liked and what you didn’t like. Use the comments section or tweet us with the #plasticpitch hashtag.