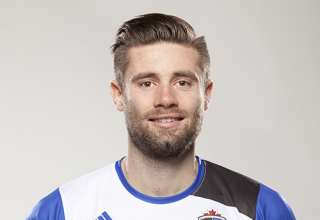 At the end of the 2015 season, FC Edmonton’s Ritchie Jones felt pain in hus knee. He didn’t think it was overly serious — likely just aches caused by overuse. After all, the English midfielder had played soccer since he could walk, including 44 games with the Eddies over the previous two seasons.

By the spring of 2016, FC Edmonton’s training camp had begun, and the knee didn’t get any better.

“The tendon felt rock hard inside of my knee,” said Jones.

The spring season began, and Jones was still on the sidelines. There were ups and downs, and the hope was ready that the Manchester United product would be ready to play at the beginning of the fall season. But, as the spring season wound down, it was clear that the knee wasn’t going to cooperate. The doctors told Jones he needed complete rest.

And that’s when he and the Eddies came to the mutual decision that it was best to terminate his current contract, allowing him to go home to England and get that rest he so badly needs.

“It needs complete rest in order to heal up,” Jones said Friday as he prepared for his trip back across the Atlantic. “I’m pretty gutted about it.”

Jones said that this will be the first time he can remember that he will be away from football. But the time away will give him time to clear his head.

But, if the knee does heal — if Jones gets back to 100 per cent — he said he would consider giving FCE coach Colin Miller a ring.

“I definitely enjoyed my time in Edmonton. I wanted to come here (North America) to play, and I got that opportunity. Football is a game where strange things happen.

“I really appreciated the faith that Colin showed in me.”

Jones said that it took him some time to adjust to the North American Soccer League, and Miller gave him that opportunity — allowing Jones to progress to the point where he was satisfied with the level of his play. In 44 games, Jones scored seven times and was credited with three assists.

Of course, with Jones heading back to England, the Brexit vote had to come up; a day after the United Kingdom voted to leave the European Union, Jones believes the post-vote bickering between the Leave and Remain camps has to come to an end.