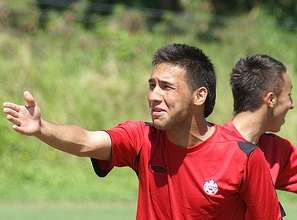 Sadi Jalali and Kianz Froese Gonzalez won’t be on the pitch next Monday when FC Edmonton ends its holiday break reconvenes its off-season training.

FCE confirmed Thursday that, as scheduled, the two teenagers have ended their training stints with the club.

Jalali and Froese Gonzalez had been training with FC Edmonton before the Christmas break after signing unique deals in early November. Both had committed to join German clubs — Jalali with Kaiserslautern and Froese Gonzalez with FSV Mainz. But, while they waited for the paperwork to be processed and the January international transfer window to open, the duo agreed to join FCE. The deal? That both would pledge their North American pro futures to FCE. So, if the German deals fell through, the players’ rights would revert back to FCE.

The two will now head off to Europe, but neither Mainz nor Kaiserslautern have confirmed any deals have been closed with the players in question.

Jalali was part of the Canadian side that finished second in the CONCACAF U-17 championships and qualified for the U-17 World Cup in Mexico. In Mexico, Jalali scored the opener in a 2-2 group-stage draw with England — a game famous for the late equalizing goal off the foot of Canadian keeper Quillan Roberts. He was also part of Canada’s U-18 squad that played a series of friendlies in Costa Rica in November.

Froese Gonzalez represented Cuba at the U-17 level, but grew up in Manitoba.

Both are expected to join the youth wings of Kaiserslautern and Mainz, respectively.

Both joined FCE in early November and trained with the club’s first team.