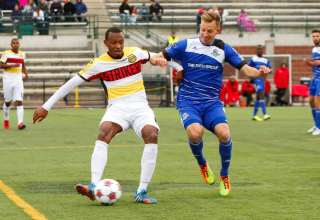 After several years of frustration, it must be awfully nice for FC Edmonton and its supporters to look forward to a real, legitimate six-pointer.

The Eddies, who have scored eight times over the last four games — three of them on the road — are now just six points behind the Fort Lauderdale Strikers and Tampa Bay Rowdies, who are tied for fourth spot on the NASL combined spring/fall table. That fourth spot represents the final playoff spot in the league.

If the Eddies can beat the Strikers on Sunday, they’ll close the gap between the teams to three points. Meanwhile, the Rowdies play the Carolina RailHawks (who are just four points ahead of the Eddies) on Saturday.

“The guys know what a big game it is already, and we’re trying to take some of the pressure off of them this week in training,” said coach Colin Miller after the team’s training session in Clareview on Thursday. “The guys know the significance of the result. I would settle for a sub-standard performance if we get the three points. At this point of the season, it’s about getting three points. We’re capable of doing it.”

But, for the Eddies to make up the ground, they’ll need to break a trend. The Strikers are the Eddies’ bogey team in NASL. In 14 meetings between the two, FCE has won just twice; and that includes the Eddies’ victory in their first-ever NASL game. In the spring, despite flight issues, lack of sleep and inhospitable wintry weather in Edmonton, the Strikers beat the Eddies.

“I looked at my written report from the last time we played them,” said Miller. “I actually had written down that we had played well but let ourselves down defensively.”

In the spring of 2013, the Strikers came to Edmonton with a B squad, as it was resting its starters for a U.S. Open Cup match. The Strikers won that game, too.

But the wild card in the game might be a former Striker; Lance Laing has been a major contributor to the offence — he scored in last week’s 3-2 win over Carolina — putting balls in the net, running at fullbacks and setting up teammates. Since moving from fullback to a wing position, Laing has been revitalized.

“We have been very dangerous going forward,” said Miller. “And Lance Laing, if there is a better wide player playing in this league, I have yet to see him. He is really tormenting a lot of fullbacks at the moment. I’m not singling him out specifically for a wonderful performance on Sunday, but I just think there is a confidence in Laingy in the moment. He’s scoring goals, he’s setting goals up for us. He’s a real handful to play against. His pace, he’s got several different gears he can run up to. He’s been a revelation since he’s gone to that wide left position.”

Miller said that FCE leading scorer Daryl Fordyce, who missed out on last weekend’s trip to the Carolinas, is still listed as “day-to-day” with tendinitis in his heel. Miller said that he doesn’t want to put Fordyce in the lineup at 80 per cent and a higher risk of aggravating the injury. He wants to wait till the Northern Irish forward is at 100 per cent. And, midfielder Milton Blanco, who is out with a knee problem, is at least a couple of weeks away from return.

The Strikers will be without Darnell King and Walter Ramirez, who are both suspended for Sunday’s match.

The Eddies trained this week in Clareview, in northeast Edmonton, as the contractor who installed the turf at Clarke Stadium works to repair a few deficiencies. The City of Edmonton has advised that all work at Clarke will be completed on time and Sunday’s match against the Strikers is in no danger.