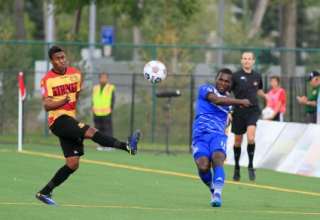 All in all, it was a pretty good day at the office for FC Edmonton left winger Lance Laing.

Set up a goal against your former team? Check.

Score a goal against your former team? Check.

Sneak in a smooch with your fiancée after scoring? Check.

Run the opposing fullback into the ground? Check.

Laing was clearly the focus as the Eddies thrilled the home supporters Sunday with a 2-1 win over the Fort Lauderdale Strikers. The win puts Edmonton just four points back of Carolina in the overall standings; the RailHawks currently hold down the fourth and final playoff spot. The result also vaulted FCE into fourth in the NASL fall standings.

And a big part of the FCE renaissance has been the decision to move Laing from left back to the left side of midfield. What started as an experiment at the end of the spring season may be the coaching decision that might just turn around a season. The change in FCE’s offensive output has been that dramatic since Laing has taken a bigger role in creating and taking chances.

“The change from fullback to midfield, it’s been good for me,” said Laing. “I am really enjoying my football.”

On Sunday, he had a victim that was ripe for the picking. Fort Lauderdale coach Gunter Kronsteiner was forced to start a makeshift lineup, due to suspensions, injuries and visa issues — with some of his players not being eligible to work in Canada. The biggest issue was at right back, where Darryl Gordon made his first start of the season. Gordon was absolutely worked by Laing all game long. And, with a thin bench, Kronsteiner couldn’t offer his novice fullback any help.

Kronsteiner said he knew the match-up with Laing — a former Striker — would be an issue even as his team was making the northwestern journey to Edmonton. He said he knew it would be a critical match-up. And, in the end, it wasn’t close.

As the first half went on, Laing was able to isolate Gordon and get past the fullback. On one occasion, Laing’s cross drew a handball call against defender Rafael Alves. (That was one of 13 cards handed out by referee Sheena Dickson; more on that later). Then, Laing showed off both his athleticism and his smarts. After taking an outlet pass from defender Beto Navarro, Laing held the ball at his feet as he walked up the wing, begging for Gordon to dive in. Gordon obliged, and then Laing turned on the jets and pushed the ball past the fullback. But the Strikers had Alves, six-foot-three, and six-foot-five Stefan Antonijevic as the centre backs. Crosses in the air would be pointless. So, he sent a low, bouncing ball into the top of the box, where Ritchie Jones met it with a perfect side-footed effort.

When asked if he relished the chance to play against Gordon, he responded with confidence.

“To tell you the truth, I feel that’s I’ve played good against a lot of different fullbacks this season.”

In the second half, Laing was able to find space on the left side, then settled down a high cross and picked the far corner of the Strikers goal with his low shot. After the ball nestled into the goal, Laing dashed to the sideline to give his fiancee a kiss.

At 2-0, the game should have been killed. But, with less than 10 minutes left, Kronsteiner rolled the dice, moved men into the attack and pushed Alves into a centre forward position. The pressure was rewarded when FCE fullback Edson Edward was given a yellow card and a penalty kick was awarded; Dickson felt that Edward had pulled back Pecka in the box. Aly Hassan, also making his first start of the year, buried the penalty and it was game on.

It got even more nervous for the Eddies when Neil Hlavaty got his second yellow for an intentional handball — and the home side had to hang on with 10 men.

“We should have had them buried,” said FCE coach Colin Miller. “But we imploded at the end, with some criminal mistakes… Still, it was a great all-around effort, a massive result for us.”

And, despite the late pressure, Kronsteiner agreed that FCE deserved the full three points.

Hlavaty’s sending off represented the 13th card Dickson showed in the game (nine of them to the Eddies). Hlavaty’s first card came as the result of arguing with Dickson; and that was the case for many of the cards. More cards were shown for dissent than for actual fouls.

Hlavaty will miss next week’s game with Minnesota. But, with two wins in a row and a new burst of confidence, this Eddies team feels a whole lot different than the one we saw in the spring. They score. They create chances. And, we can say that the Eddies can boast the best left-sided player in the league.