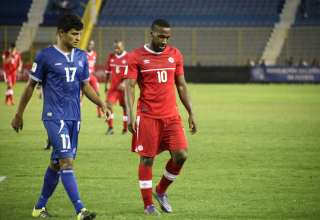 Canada in action against El Salvador in 2015.

El Salvador’s national soccer federation has claimed that a representative of a wealthy Honduran businessman has offered its national team money to do well against Canada in Tuesday night’s World Cup qualifier. The El Salvadorans say they refused the offer.

El Salvador is mathematically eliminated from qualifying for the Hex — CONCACAF’s final World Cup qualifying phase. Tuesday night, it will play out its schedule by facing Canada at BC Place. Meanwhile, the stakes are high for Canada. The Canadians need to win, and hope that Honduras loses badly enough in Mexico to overturn an advantage of five in the goal-difference column. If that happens, Canada goes to the Hex while Honduras looks forward to a couple of years worth of friendlies.

Meanwhile, the Hondurans protested the assignment of American referee Mark Geiger to their match at Azteca. The Hondurans claim that Geiger made some very pro-Mexico calls during El Tri’s controversial 2015 Gold Cp run.

But, really, is it that horrible that someone who can pay out bonuses offers a team money to… ahem, play well? The alleged offer came from a Honduran source, who (obviously) wants Honduras to go through. The allegation is that El Salvador was offered money to, ahem, beat Canada or to at least keep the score respectable.

Owners often put incentive bonuses in contracts, no? If a player or team hits certain goals during the period of the contract, bonuses are paid out. To me, this is not very different when we try to place the El Salvador charges on the sliding scale of morality.

I wrote a column last week that beseeched the Mexican team to go and beat the snot out of Honduras on Tuesday night. Does that make me a fixer (albeit, a very cheap one?).

As a Canadian, I am troubled very little — actually, none at all — that someone offered El Salvador’s players an incentive to play as well as they possibly could in a game that really has no meaning to them. Paying teams to lose or draw — that’s match fixing. But, in my book, paying someone to win or to perform at their best — that’s confidence.

Maybe I’m in the minority here — but I have a real problem when we in the media try and moralize about money in the game, yet take money from betting sites or publish the Vegas lines. (In the past, this site has had betting sites advertise here — and we have no issue with it). Match fixing is an issue, no doubt about it. I just have a hard time with the idea that offering players side money to play as well as they possibly can is really match fixing. Immoral? Maybe. Sure. I’ll give you that.

But, to my Canadian readers, if you had the money to burn, would you be tempted to dangle it in front of the Mexican team — with the caveat that it beat the hell out of Honduras?