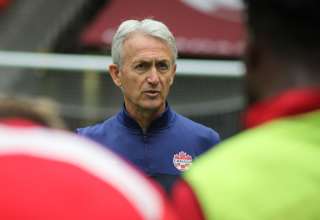 At least it didn’t matter.

So Canada’s, ahem, 3-1 victory over El Salvador at BC Place Tuesday, the final day of group play, was meaningless. Canada now looks forward to a couple of years worth of friendlies against countries whose names end in -stan and –ania. It also means Canada’s World Cup drought has hit the 32-year mark — cause the only way Canadians will be in Russia in 2018 is if they buy tickets or our refs get assigned to do games.

Will Benito Floro be the coach who leads the national team into yet another rebuild process? If Honduras would have done the expected and lost in Azteca, the spotlight would be on Floro — who has continually refused to use natural fullbacks to play, well, fullback. And, on Tuesday, he subbed out the scorers of the first two goals — Cyle Larin and Nik Ledgerwood. He decided that his best, last, desperate gamble was to put centre back David Edgar into the game as a centre forward.

And, in an only-in-Canada ironic fashion, Edgar scored a meaningless consolation — even though the linesman blew what was really a rather easy offside call to make. So, if Edgar’s 82nd minute substitution was indeed the last move Floro would make as Canada’s coach, we can all at least chuckle that it led to a goal that shouldn’t have counted — scored by a centre back who came in for an attacking player. If that’s not peak Benito Floro, I don’t know what is.

But, again, it didn’t matter. Let’s get back to Azteca. Mexico had one golden chance to take the lead against Honduras early in the second half of their game, but Hirving Lozano, the player who has already been a nightmare for Canada’s youth and senior teams, blasted over the bar when he had a wide-open net staring him in the face.

That’s what Canada gets for not being in control of its fate on the final day of group play.

Of Canada’s three goals scored against El Salvador — only one was the product of great team play. The first came when a dreadful clearing attempt from an El Salvadoran defender clanged off of Junior Hoilett and fell to Larin in the box. The third goal, as mentioned earlier, was clearly offside.

Only Ledgerwood’s goal, which he deftly placed into the top corner of the goal after taking a defence-breaking pass from Hoilett, was a true thing of beauty. Hoilett skipped through a par of defenders before sliding the ball to Ledgerwood. And Hoilett was falling down as he made the pass.

Oh, didn’t I mention? Hoilett was subbed off, too.

There’s another thing. Just after Ledgerwood scored, El Salvador’s Darwin Ceren received his second yellow for a nasty late challenge on Hoilett — that, really, just for the record’s sake, should have been a straight red.

The Canadians were caught on the break, a two-on-two which saw former Montreal Impact Gerson Mayen slide a ball over to Nelson Bonilla to tap into the goal.

With the score at 2-1, Floro made the subs that will no doubt have the knives out — taking off his goal-scorers and Hoilett, a goal provider. That set up the Edgar consolation.

But, really, expecting a Canadian team that had only scored twice in its previous five group games to win by a lot was, well, maybe too ambitious. Actually, a three-goal output was pretty decent, though there is little excuse for giving up a counterattack goal while up a man. Canada really was depending on Mexico on laying a beat down at Azteca, and that didn’t happen.

We can talk about conspiracies all we want. But you simply can’t depend on a team that’s already clinched to help you out.