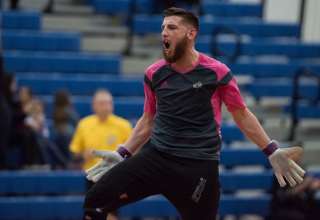 It’s the morning after Canada’s first group-stage game at the CONCACAF Futsal Championship, and I’m still trying to process just exactly what the few of us who watched the Facebook web stream witnessed.

Even though Canada lost to the host Costa Ricans by a 3-2 count, Joshua Lemos’s performance in goal was one of the great performances I’ve ever seen in a game where nets and netminders are involved. Soccer or hockey.

After shocking the United States in the play-in series, Canada was not expected to come close to winning its Group B opener. Costa Rica was at home and its futsal program is regarded as the best in the region. The Ticos are the defending CONCACAF champs.

But, Lemos made ridiculous save after ridiculous save, and put Canada in a position to come out of the match with an unlikely draw. But Robert Renaud missed the target with just a few seconds left on the clock after a rebound fell to him in front of the Costa Rican goal.

But back to Lemos; CONCACAF doesn’t have the stats posted — in terms of shots on goal — but it would not be unfair to state that the blue floor looked like it was tilted all night long. The Costa Ricans fizzed the ball across the blue tiles, and created chance after chance. But Lemos made sensational save after save, and the CONCACAF commentator was running out of superlatives to bestow on the Canadian keeper. Lemos was called a “force of nature.” He was “gigantic, monumental.”

Lemos was beaten three times. Two of those goals came on penalty kicks, the third on a set play. He was not beaten from open play, despite dozens of glorious chances from the hosts.

Maybe the most awesome save came in the second half — when the Costa Ricans came in on a two-on-zero break. A goalmouth pass should have led to a tap-in goal, but Lemos followed the pass across his net to make a sensational diving stop.

But his body of work was, as a whole, simply inspired. There were sprawling saves to deflect shots that were headed goalward. There was a series of kick saves. His big paws swatted away more shots. Had the TSN producers been watching this game, Lemos might have provided the entire field of candidates for SportsCentre’s highlight of the night.

Canada plays Curacao Monday evening. The streams are free on CONCACAF’s Facebook site. You could find many worse entertainment options on a Monday night. If Canada finishes in the top two in Group B (the Canadians wrap up the round-robin schedule with a game against Cuba), the team will earn tickets to the Futsal World Cup. Canada hasn’t played at one of those since 1989 — a time where the word “futsal” was unknown to most soccer fans in this country.