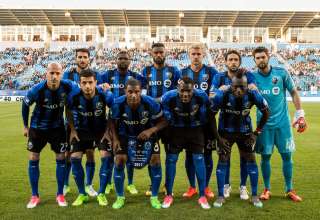 The final score indicated that the Whitecaps were a measly road goal away from taking their Canadian Championship semifinal against the Montreal Impact.

But it sure didn’t feel like it, huh? After the Impact took a 3-0 first half lead in Tuesday’s second leg at Stade Saputo, this tie felt, well, over. When the Impact went up 4-1 just seconds after Alphonso Davies looked to have given the Whitecaps a lifetime, it felt like door was locked tight.

The Whitecaps made it 4-2 after Kyle Greig beat Impact defender Kyle Fisher in the air and headed the ball into the goal, but it never felt like that third goal was going to come. Meanwhile, it sure seemed like the Impact could score again if the home team wanted to go up a gear.

Entering the second leg trailing 2-1, the 4-2 win gave the Impact a spot in the Canadian Championship final.

The final shots on goal? Impact 10, Whitecaps 2. Yes, it finished 5-4 on aggregate, and one more road goal would have given the Whitecaps the tie; but, wow, this second leg wasn’t close. And, really, based on what we saw, there really is no “what if” narrative for Whitecaps fans to latch onto. The team with the triangles on their shirts were comprehensively beaten.

The Impact was off to the races 20 minutes into the first half, after Ignacio Piatti slotted home a penalty after Anthony Jackson-Hamel was brought down in the box by Whitecaps keeper Spencer Richey.

Just eight minutes later, and Piatti was back on the spot, converting after Mauro Rosales slid into him in the penalty area. It all started with an Impact free kick just outside the Whitecaps’ penalty area. Laurent Ciman stood over the ball, and everybody in the stadium assumed that he was going to try and get a shot past the wall and on target. But, instead, he made a quick pass into the box that sprung Piatti, and Rosales dove in.

Blerim Dzemaili made it 3-0, as he was in the right place at the right time after fullback Ambroise Oyongo’s low cross changed direction and went right through the legs of Whitecap Russell Teibert. Dzemaili pounced on the chance and slammed the ball in the net.
Davies made it 3-1 in the second, as Patrice Bernier gave his quarry too much space, allowing the Whitecap phenom to turn and shoot.

But, the next time the Impact got up the field, Bernier made up for his defensive lapse, as he floated a nice cross for Jackson-Hamel to chest down and slam into the roof of the net.

Greig got what amounted to be a consolation goal, but there was no doubt that the Impact deserved this tie. The Whitecaps, thanks to Davies, dominated the first half of the first leg but, after that, it was all Impact.