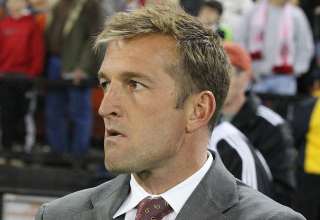 The Montreal Impact came to visit Rio Tinto Stadium in Sandy, Utah, hoping to slay a dragon. It was somewhat of a David-versus-Goliath affair, and the probability of its first ever MLS win was unlikely. But, the visitors did a lot to frustrate their more experienced opponent and the effort nearly worked — yet, the home side came out with a 1-0 win.

Although Real Salt Lake controlled much of the first half, the Impact really clogged up RSL’s preferred centre portion of the midfield and tried to pounce into the passing lane to intercept passes, and in many cases they were successful.

“I think we kept trying to squeeze things into players that were already marked, and gave the ball away a lot,” explained Real Salt Lake Coach Jason Kreis after the match. “We probably could have been and should have been punished for that.”

The home team, however, created the bulk of the early chances but failed to connect and it took a penalty kick by Paulo Jr. to give them a 1-0 lead heading into the half.

The key play came in just the 12th minute when RSL had a flurry in the Montreal end. The series culminated with Canadian Will Johnson heading a cross toward goal that connected with Salt Lake native Justin Braun’s hand. The Brazilian confidently stepped up to the spot, waving off RSL Captain Kyle Beckerman, and put the shot away — out of the reach of goalkeeper Donovan Ricketts who had guessed correctly on the play.

For Montreal, its best chance in the opening stanza came late in the half. Defender Jeb Brovsky put a long diagonal cross into the box that just missed the head of Lamar Neagle, who was making the run toward the far post. Had he connected, it appeared that he had a good chance of sneaking it past goalkeeper Nick Rimando.

In the second half the game opened up. Real Salt Lake got forward in the early portions of the half, creating some half chances of its own, but then struggled to get back defensively as the Impact launched counterattacks.

The bulk of the Montreal success appeared to come down the left side as Justin Mapp took advantage of Japanese player Terakazu Tanaka, making his first start at right back. Mapp combined well with Justin Braun who made a number of key central runs.

In the 56th minute it appeared that the two would convert as Mapp got into the left channel ahead of Tanaka. He picked out Braun unmarked running through the penalty area, but his square ball was snuffed out by RSL keeper Nick Rimando.

While much of the half had some back and forth action, Montreal picked up the urgency in the waning minutes and created some excitement in the RSL end. However, the home team’s defense was up to the task blocking shot after shot, which only required Rimando to deal with a couple of balls that made it through.

In the end, Kreis gave some praise to his opponent, “It’s a team with some interesting pieces, and some talented players and you could see that they probably have a lot of confidence coming away from this game just like they did the first 45 minutes against New York.”

NOTES: Real Salt Lake picked up two key injuries in the match after exhausting their available substitutions. Ned Grabavoy feared that he’d broken a rib more with more than 20 minutes left in the match, but played on. He reportedly was receiving attention at a local hospital after the match. Meanwhile Javier Morales pulled a hamstring and was unable to participate in the action in the last few minutes, essentially giving the Impact a man advantage.