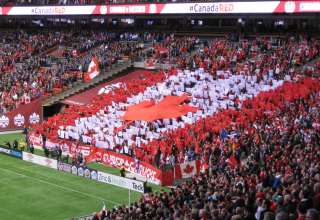 So, we’ve hit that once-every-four-year point in our lives. Canada has once again been eliminated from World Cup qualifiers.

I’ve been through a lot of them. It doesn’t get any easier with experience, let me tell you. Over the next couple of days, you’re going to go through a lot of deep, dark stuff. You’re going to weird out the people you know who aren’t into soccer (this is likely a good day to call in sick… oh, you’re at work already? Well, scratch that).

Here are some of the things you’re going to deal with over the next few days. Honestly, if it was up to me, I’d be locked in a bedroom with only tomato sauce to live on — just like Trainspotting. But we can’t all do that, can we, fellow Canadian soccer supporters? Society expects us to be productive. Society doesn’t understand that it’s better for everyone if we locked ourselves in our bedrooms.

Blow It All Up
Of course, this is your first reaction. The Canadian Soccer Association is an evil cabal that has done everything in its power to stunt player development and the growth of the game. Roar! The player development plan isn’t coming along fast enough. In fact, we’re going about everything the wrong way and we should just start over. We hired a new director of development? Fire him! Fire everybody!

Stations of the Cross
You’re going to lose the battle. You know you shouldn’t post some kind of miserable manifesto on social media, but you will. You’ll recount the first Canadian national team game you attended. You’ll go on about how sweet it will be when Canada finally makes a World Cup. You’ll let your followers know about how much this hurts right now, but you’ll still wear your Canada shirt proudly in the morning. Be careful, the cathartic social media explosion is the modern version of the mixtape. It used to be that, when you were sad, you made a mixtape of Joy Division songs and Smiths songs. But now you write bullet-point essays on social media. But, your fellow supporters will be there for you. We’ll like and share your post even though it’s, like, the 88th manifesto we’ve read today. It’s cool. Friends don’t judge.

Those Filthy Cheaters
You will use CONCACAF as a verb at least a dozen times today. “I’m late for work because the subway/LRT/SkyTrain CONCACAF-fed me.” “I had an argument with my wife, she CONCACAF-fed my plans for the weekend.” Any time you see someone in pain, you will think “CONCACAF.” This is really bad if you are an emergency room doctor and a Canadian soccer fan. “Is it broken, doc? I think it’s broken!” “Get off the gurney! Stop CONCACAF-fing!”

I Hate All Other Sports
You will hear someone talking about the World Cup of Hockey and you will moan about how it doesn’t matter, that no one outside of Canada, some northern States and social-welfare Scandinavian nations cares about that sport. You will groan about baseball. Every other sport is an affront. And, you wonder how come your fellow co-workers aren’t devastated about Canada’s elimination. “We’d qualify for the World Cup — the soccer one — if only Canadians cared!” You’ll moan about how we’d have a better soccer-talent pool if we didn’t lose so many kids to hockey.

Obscure Player Who Should Have Been Called Up
You’re sure that coach Benito Floro has ignored your favourite Canadian player in the Finnish second division for too long. If only Stuart McDoogle from HK Tiipiinlaakenaaroniitiiraha had got the call, things would have been different!

Ted
It’s coming. You know there will be firestorm of Ted tweets about how poorly the Canadian national team has done since there have been Canadian teams in MLS. Will you retweet them with a “hell yeah” or will you hit the mute button?

Major Host City Lets Us All Down
This honour has fallen to Edmonton and Toronto in the past, now it’s Vancouver’s turn. We’ll all conveniently forget that the home games at BC Place against Honduras and Mexico had wonderful atmospheres — and gripe about all the empty seats for the El Salvador game. We’ll totally ignore the fact that the game was on a Tuesday, and fell on what was also the first day of school for many districts.

We’ll Freeze Them Next Time
We’ll look at Mexico and say “when we needed you to win, you only drew Honduras 0-0.” We’ll spend the next two years talking about how, the next time Mexico comes to Canada, we’ll play them on an icefield in Inuvik. We’ll laugh maniacally at the thought of hosting Honduras in Winnipeg at the height of mosquito season.

Changing Vacation Plans
Mexico didn’t do Canada any favours, so you’re gonna show ‘em. You’re gonna ignore all those deals for those liquor-soaked all-inclusive resorts in Mexico. You’re gonna stay home. To hell with Cabo. Cancun? Can’t do! Puerto Vallarta — not this time. You’ll hold out till the first day it hits -20 C. Then, your opinion of Mexico softens a little bit. But, hey, you had willpower for a month or two! That’s not nothing, is it? We get it, the urge to go to Mexico is about as naturally Canadian as is the need to own a pick-up truck or the desire to put enough cream and sugar into your coffee to turn it into a warm milkshake. There are some things you can’t fight.

There it is. Good luck dealing with people and stuff over the next couple of days.