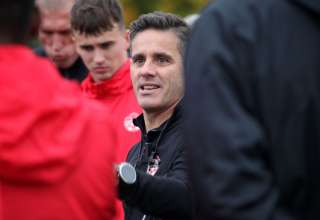 Training for the Canadian men’s national team includes passing drills, running, meeting with alumni of Canada’s Gold Cup and ‘86 World Cup squads — and meeting with members of the military and talking about what their uniforms mean to them.

Welcome to the culture of John Herdman, one of the philosopher-kings of modern soccer. When he took over the women’s program seven years ago, he immediately set into a program of healing after the national side crashed and burned at the 2011 World Cup. Now, only months into the plan as he works to rebuild the men’s program from scratch, we’re already seeing Herdman ask players to buy into the program on a much deeper level than get off the plane, go to training, put on the shirt, play the game, fly back to your club.

Like he did with the women’s side, he’s introducing the work of Austrian philosopher and concentration camp survivor Viktor Frankl, about keeping positive attitudes in even the toughest situations. He’s talked with players about Paulo Coelho’s The Alchemist,  a modern parable about a shepherd boy’s adventures as he searches for the largest imaginable treasure.

During his media call on Friday, ahead of the Oct. 16 Nations League qualifier against Dominica at BMO Field, he praised his players for how “well-read” they were. Because, you know, so many coaches of sports organizations will talk about how well-read their players are.

And, by exposing the current players to those who played for Canada in the past, to member of the military, he hopes to build a new culture around the team, one that’s deeper than just playing football.

“We want to unlock the potential of the leaders he have here,” Herdman said.

“We want to build a solid, resilient, culture,” Herdman said.

Herdman wants the culture to be so strong that “the team binds together in big moments.”

When you have a leader with Champions League experience like Atiba Hutchinson, when you have players like Lucas Cavallini in Mexico or Jonathan David baning in goals in Belgium, when you have Alphonso Davies heading to Bayern Munich, the Canadian camp has to be more than about, well, soccer.

“We have players who are playing at the highest levels of the game,” Herdman says. “We’re not going to teach them a lot about their core sport. They’ve put in their 10,000 hours. They’re experts in their field.”

So that’s why Herdman thinks it’s important to look at cultures outside of soccer, from philosophers to the NFL to the military, to bring new ideas to the group. To build the team.

“When a new coach comes in, there’s always going to be a period of evolution,” he said.

And Herdman repeatedly stated during the call that he wasn’t going to judge any coach who came before him. He wouldn’t speak to how his method’s might have compared to Octavio Zambrano or Stephen Hart. He said that the truest assessments of how his philosophy is being received can only come from the veteran players. He said he’s looking forward to meeting with Hutchinson on Saturday, to get the midfield general’s take on the transformation going on inside of the Canadian team.

“That’s the test,” said Herdman. “The key influencers in the group — what’s their passion like?”