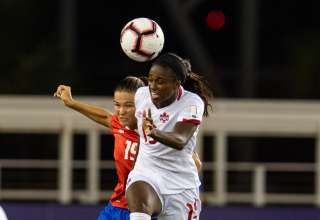 Canada will play Panama Sunday, with the winner getting one of CONCACAF’s qualification spots at the Women’s World Cup.

Canada secured top spot in Group B of the CONCACAF Women’s Championship Thursday night in Edinburg, Tex. with a 3-1 win over Costa Rica. The CWC also serves as the World Cup qualifiers, with three spots going to CONCACAF nations. Both finalists get in, while the two losing semifinalists will battle it out for the third spot. The semifinal loser has a chance to get in via a playoff with Argentina.

Costa Rica, the pre-tournament pick to get out of Group B with Canada, is going home. Jamaica took second spot and will play the United States, gulp, in the other semifinal.

Costa Rica qualified for the 2015 Women’s World Cup and finished with two draws and a loss in the group stage. So, not even making it to the playoff rounds of the CONCACAF tourney is a major step back for that country.

Janine Beckie opened the scoring thanks to an awful piece of goalkeeping from Costa Rica’s Daniela Solera. Canadian midfielder Jessie Fleming pushed a hopeful ball into the area. Solera was first to it, but somehow managed to let the ball get right through her, allowing Beckie to run onto it and score on the empty net.

Solera wasn’t done. She muffed what should have been a fairly routine catch of a cross from Beckie, leaving the ball for Nichelle Prince to push in the net.

But Solera did recover in the second half to temporarily deny Christine Sinclair’s attempt for her 175th career goal, palming the shot away from the Canadian veteran, who was on the break and looking to get closer to Abby Wambach’s all-time international goal mark of 184.

Sinclair, though, would get that 175th goal in the 58th minute, and Canada was on cruise control from that point on.

Gloriana Villalobos danced through the Canadian backline to score a second-half consolation for Costa Rica, the first goal Canada has surrendered at the tournament.