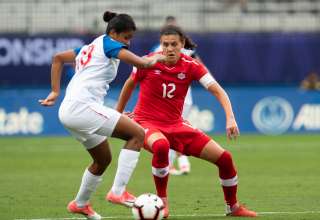 The formality of World Cup qualifying is done and dusted for the Canadian women’s team.

With a 7-0 win over Panama in a CONCACAF Championship semifinal, the Canadians assured themselves a berth at next year’s Women’s World Cup in France. But, we need to be honest here, CONCACAF qualifying does not yet offer any sort of parity — the Americans and Canadians go into the process knowing full well that the regional championship is a tuneup. And, it shows in the way we as Canadians look at the tournament. None of us talked about “can we qualify?” going into this tournament. Heck, most of us were far more focused on Christine Sinclair’s goal total.

(She had two on Sunday against Panama, by the way, raising her career total to 177 international goals).

Panama held Canada at 0-0 for 44 minutes until Sinclair finally got the favourites on the board. The floodgates opened in the second half, with Fleming and Sinclair both heading home in the first four minutes after the restart. Janine Beckie and Rebecca Quinn would score before Adriana Leon came on for Sinclair and got a brace of her own.

Like it was in the wins over Cuba and, maybe to a lesser extent, Costa Rica, watching the game felt more like watching a spirited training session.

Sinclair’s opener came off an inch-perfect cross from Beckie, who dashed down the left wing and could not have placed a more perfect ball into the Panamanian  penalty area. Sinclair’s second goal was a header that came off a great cross from Nichelle Prince, who made a run down the right side.

It’s a good result for Canada, but you hope down the road that it becomes nearly  impossible for the next generation of Canadian or American players to reach the kind of goal totals that Christine Sinclair or the woman she is chasing for the international scoring record,  Abby Wambach, amassed in their careers. Here’s to hoping that the rest of the region improves, meaning that there are fewer 12-0 or 7-0 scores which help elite players pad their stats.