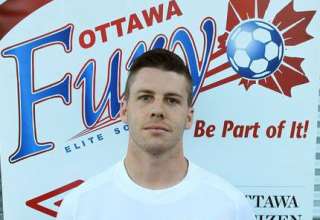 Carl Haworth’s season is hitting the realm of the ridiculous — in a good way.

Actually, “good” is a word that does no justice to describe what Haworth is doing to PDL opposition.

With his Ottawa Fury trailing 2-1 to Reading United FC in Saturday’s Eastern Conference semifinal, Haworth scored the second-half equalizer. And, if that wasn’t good enough, he buried the penalty to give the Fury the 3-2 win. Ottawa advances to the Eastern Conference final, and Haworth now has 17 goals on the season.

Haworth had three goals in the division final. So that’s five goals over the course of two playoff games. Wow.

Haworth came to Ottawa in 2013 with the idea that he would do enough to impress at the PDL level to earn himself a shot with the Fury’s NASL side, which begins play in 2014. What an audition the 2013 PDL season has been.

Even though Reading snapped the Fury’s streak of shutout soccer at 831 minutes, the Ottawa side twice bounced back from one-goal deficits to take the match.

Eddie Jones got credit for the Fury’s opening goal.