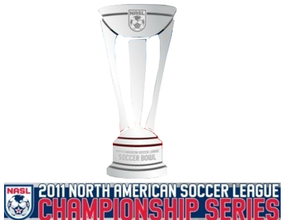 The last time I saw the NSC Minnesota Stars in the flesh, they lost an early September match by a 3-1 count to FC Edmonton after a dreadful second-half display. The Stars were plummeting down the NASL standings, fast.

Now, the club has a hand on the Soccer Bowl. The Stars’ Cinderella run through the NASL playoffs looks like it might never strike midnight. The Stars will head to Florida with a 3-1 lead over the Fort Lauderdale Strikers after the first leg in Blaine, Minn.

The Strikers, which dominated FC Edmonton and the Puerto Rico Islanders in their playoffs encounters, couldn’t establish their midfield passing game, and were thoroughly dominated. In fact, the Strikers’ lone goal was an own goal, a total fluke.

Sure, by beating FC Edmonton 5-0 in the quarter-finals, the Strikers have shown they can do a hell of a lot of damage at home. A two-goal lead is nice, but it’s not a sure thing.

Still for a team that had to wait until the final game of the season to sew up the sixth and final seed in the playoffs, having a two-goal lead in the final is, well, cause for its players to pinch themselves.

Just a few ticks after the kickoff, Neil Hlavaty broke the ice, rocketing a free kick in to give the Stars an early lead.

That lead held till halftime. In the second half, Stars’ defender Justin Davis chested down a cross from Striker and NASL All-Star Lance Laing; but he was far too close to keeper Joe Warren and his goal line, and the result was a rather embarrassing own goal.

Now, this is where the NSC Minnesota team I saw back in September would have collapsed. The Stars held a 1-0 lead at halftime of that match; but once they surrendered the equalizer, they simply lost the plot, and Edmonton came at them in waves.

But, within a minute of surrendering the equalizer, the Stars equalized. Luke Mulholland smashed a half volley in after a lovely sequence of passes from the Stars. Instead of collapsing, the Stars simply went back to dominating the pace of the game.

Lucas Rodriguez finished the first leg by slipping in a shot at the near post — which you had to look at over and over again to figure out how it squeezed by keeper Matt Glaeser.

The Stars have taken out No. 3 seed FC Tampa Bay in Florida, and survived a furious comeback attempt by the No. 1 seed Carolina RailHawks. So, you have to like the odds of them going back to the Deep South and getting another result — and bringing back a Soccer Bowl to the Twin Cities region.