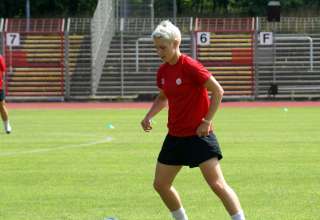 The Canadian women will face Colombia in the Pan Am Games’ soccer semifinal.

The Canadians and Brazilians finished tied atop their qualifying group after the teams played to a 0-0 stalemate Saturday. But Brazil won a coin toss and got the top spot in the group. So, the Canadians will face the Colombians, who won their group.

But it’s hard to read too much into the draw with Brazil. Knowing that Canada had already qualified for the semis with two wins in its first two games, coach John Herdman made getting key players some rest a priority over winning the game. Star striker Christine Sinclair only came in to play the second half.

Christina Julien, who has already scored twice in this tournament, only played one half, as did midfield maestro Diana Matheson. Sophie Schmidt, another one of the regulars who only played 45, had the best chance to score out of anyone on either side. She had a one-on-one chance against the Brazilian keeper, Barbara. But the keeper guessed correctly and kept out the chance.

Had Schmidt scored, the coin flip wouldn’t have been needed. But, judging by the way Herdman juggled the lineup, he was never worried about winning the group or finishing second.