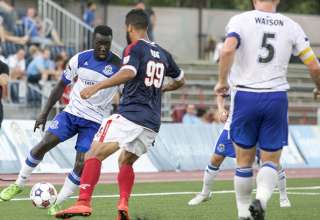 Johann Smith in action against Indy.

It’s not something you see often. So, when it happens for a reason other than injury, it’s a talking point.

That’s why the analysis of FC Edmonton’s spring-season finale — a 3-0 loss on the road to the Indy Eleven — has to begin by looking at the decision to yank keeper John Smits at halftime.

Smits allowed a goal on a shot from well outside the area. Then, he committed a foul in the box after spilling a shot — and that led to a penalty-kick marker. When the Eddies emerged at halftime down two goals, Matt VanOekel was the new man in goal.

Coach Colin Miller said there was no injury; that it was his call to change things up.

He didn’t want to pile on after the game. He simply said the move pretty well spoke for itself, and he wouldn’t say much more about it than that.

A little less than a month ago, Smits replaced VanOekel as the starting keeper; that came right after the Eddies lost to Vancouver on a second-leg 97th minute-goal in the Amway Canadian Championship semifinal.

With 22 goals allowed in 10 regular-season games — and just one clean sheet in the spring season — the Eddies’ keepers have picked the ball out of the back of their net far more than any other NASL team’s net minders.

The Eddies started the game without the service of injured striker Tomi Ameobi. Defender Mallan Roberts, who had played every minute so far this season, was off on Canadian national-team duty. Left winger Lance Laing – four goals and four assists in nine games — played earlier in the day for Jamaica at the Copa America. Right winger Sainey Nyassi was on the bench, but wasn’t healthy enough to actually play. Same with defender Kareem Moses. Forward Daryl Fordyce’s groin injury would only allow him 10-15 minutes, max.

So, right back Eddie Edward was shuffled into Roberts’s centre back spot alongside Albert Watson. Allan Zebie and Johann Smith were the fullbacks. And Hanson Boakai finally got the start that fans have been baying for all season long. (Boakai, like Smits, lasted just 45 minutes). 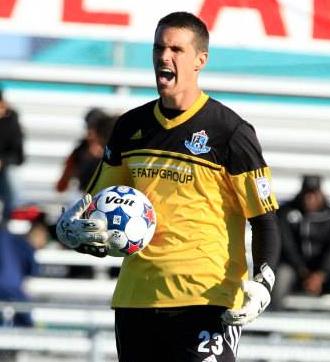 Playing on a warm, humid in Indiana, the Eddies were immediately put under siege. Ten minutes in, Indy’s Erick Norales headed a ball off the top of the bar. Then, Victor Pineda was allowed to turn in the penalty area and fizzed a shot just wide of the far post.

Smits got fingertips to a Dylan Mares shot in the 23rd.

But, just as it was beginning to look like the Eddies were going to survive the siege — as the visitors began to get more of the ball as the half went on — a giveaway from Chad Burt began what would be a comedy of errors. After he turned the ball over at half, no Eddie midfielder picked up the run of Brian Brown right up the middle of the park. No defender stepped up, either So, Brown fired from about 25 yards out — and, after one hop, the ball nestled into the corner of the Eddies’ goal.

And, just before half, Smits spilled a shot from Mares right into the path of Indy’s Kyle Hyland. Smits wrapped his arms around Hyland’s ankles for what might be the least controversial penalty call in Eddies’ history. Mares converted the chance, and FCE coach Colin Miller had seen enough.

“I am disappointed, but we started the game by having to make so many changes,” said Miller. “That’s not to make a million excuses. But I had to make a back four that was unusual; the players, individually are very good but collectively, they aren’t that familiar playing with each other.”

It got worse for the Eddies in the second half. Cristian Raudales, who had come on for Boakai, got a straight red from ref Chris Penso for a blow to the head of Indy’s Marco Franco.

“I’ve had the chance to look at the replay three or four times, and I thought it the call was a bit harsh,” said Miller. “I think it deserved a yellow, at worst. I didn’t think it was a sending off.”

And, late in the match, Indy sub Duke Lacroix streaked past the back line and smashed the ball past Van Oekel.

Hours before the Eddies faced the Eleven, left winger Lance Laing made his Copa America debut. He came on as a 54th-minute sub for Jamaica, and had an influence on the game — providing two crosses that created scoring chances for the Reggae Boyz. The Jamaicans lost 1-0 to Uruguay, but certainly the gulf between the teams wasn’t what many would have expected before the match.

Remember that Laing is also expected to go to the Gold Cup with Jamaica; so, there’s a good chance that he won’t be available for the Eddies when the fall season begins.

The Eddies finish the spring season with just nine points. But, if there is a bright side, the team is only five points out of fourth spot. Remember that the NASL gives post-season spots to the winners of the spring and fall season, then to the next two teams with the best spring-fall combined records. So, it’s likely that fourth overall would be a post-season spot — and there are still 20 games to go in the fall.

The New York Cosmos, thanks to a 3-3 draw with Jacksonville, clinched the spring season title and one of the top two seeds in the NASL postseason.

Miller said there will be additions made in the break between the spring and fall seasons. Two players have signed letters of intent, and could be on the field when the Eddies launch their pre-fall-season camp. A third will be at Gold Cup with his country.

Miller said that he also will do what he can to make sure that Laing remains with the Eddies — but stressed he has not had any inquiries from other clubs. It’s simply a case of knowing where Laing’s long-term plans lie.