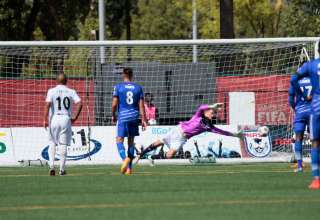 In his early days as FC Edmonton manager, Colin Miller presided over some very poor defeats.

But, in his eyes, Sunday’s 2-0 loss at home to the Fort Lauderdale Strikers trumped them all.

“That’s as bad as we’ve played since I’ve been manager,” Miller said after the match.

The Eddies produced more turnovers than you’d find in a bakery. And, they really only created one scoring chance of note — and that came in the second half with the Eddies already down a goal. And, in true comedy-of-errors style, sub Hanson Boakai and winger Lance Laing got in each other’s way when the ball sat in the Fort Lauderdale penalty area with keeper Josh Ford down and out on the turf.

The Eddies had no shots on goal in the first half. The Strikers defended deep, not allowing the home side to unleash its counterattack. Strikers coach Gunter Kronsteiner hailed his team for perfectly sticking to the game plan and taking three points out of what he called one of the hardest places in the league to come in and win.

The Eddies No. 1 keeper, Matt VanOekel, failed his fitness test Sunday morning; his hip-flexor injury wouldn’t allow him to play. John Smits, the former Eddies No. 1 who has slipped to No. 3 on the depth chart, was out with an elbow problem.

So Tyson Farago — who was named to the NASL team of the week in his only previous start, against Atlanta at the end of the 2014 season — was given the nod, with young Christian Kaiswatum making the bench as the back-up.

Farago and centre back Albert Watson were the only FCE players on the pitch who, in the coach’s estimation, would get passing grades. And he said he expects the reserve players to be ready to impress in this week’s training sessions as some of Sunday’s starters might be grabbing the bench in the team’s next match.

Farago could do little on either of Stefano Pinho’s goals. The first came from the penalty spot; the second came from a point-blank-range effort that was put into the top of the goal.

The penalty came in the second half, after central defender Kareem Moses was called for taking out Stefano in the area. Moses protested that he got all ball, as he slid to cut out the cross from winger Walter Ramirez. The fact that the ball went off Moses and well outside the area gave credence to his claim that he got the ball first. But referee Pierre-Luc Lauziere disagreed, and pointed to the spot.

Maybe, just maybe, it would be easier to argue the call if the whole sequence that led to the challenge in question wasn’t set up by such a brutal Eddies’ giveaway. But Ramirez was set free on the wing to make that cross after a terrible turnover from Eddies’ midfielder Thiago de Freitas, who, under no pressure at all, presented the ball to the Strikers.

Minutes after that play — and after de Freitas had coughed up the ball a couple of more times — his coach had seen enough and subbed him off. Winger Dustin Corea, who had got a goal and assist the week before against Carolina and was named the NASL team of the week, also got an early yank. The Winnipeg native was called into make a couple of good saves to keep his team jn it as it left itself short in the back. His best came as he raced across the goalmouth to stop Dani Sanchez’s close-range volley.

“They just hit us on the counterattack and stretched us wide,” Farago said.

But, the Strikers finally got that second goal late in the second half. And, it came on a two-on-three break; while the Eddies had sacrificed a defender, they still had enough at the back to deal with a two-man rush. But, Stefano was able to get the ball in the middle of the area to seal the three points with his second goal of the game.

Had the Eddies been able to get the three points, they would have vaulted into fourth in the NASL combined table — and into a playoff spot. Instead, they sink to sixth, behind Fort Lauderdale on goal difference, two points behind the Tampa Bay Rowdies.