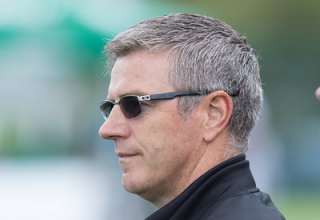 The NASL spring season: Despite boasting the second-most potent offence in the league, FC Edmonton finished second last in the table, because it allowed a league-worst 22 goals in 10 games.

And, in the fall? The Eddies are the only team in NASL to allow an average of less than a goal per game; FCE has conceded just eight times in nine matches. And the defensive turnaround has put the Eddies in second place in the fall table, and just two points out of fourth in the combined standings. That fourth spot would likely represent the final post-season spot.

So, why the turnaround? The Eddies made really only one major defensive change between the spring and fall seasons — and that was the acquisition of Brazilian Thiago de Freitas as the holding midfielder. But there’s no way that the Brazilian should get all the credit for the worst-to-best defensive changeover.

According to the coach, a lot of sweat equity was poured into the improving the play in the back.

“To be brutally honest, I gave them a bit of a blast at the start of the fall preseason,” said coach Colin Miller.

“I took the goalkeepers aside and said it wasn’t acceptable. And I took the rest of the group aside and said it wasn’t acceptable. I didn’t blame any one particular person for it, or any particular group, it was as a team that it was not acceptable, the goals that we were giving away. And then we worked their arses off. We worked them on a daily basis on the principles of defending. Pressing the ball, winning the ball as early as we could. We’re seeing that, now. We haven’t let up on that in the fall season.”

But Miller said the intensity was there in the spring, but that massive mental errors played parts in many opposition goals.

And, the coach noted that his players are professionals. They saw the videos of the goals conceded. And they were embarrassed.

“In the spring season, if we had defended like the Eddies of old, we could have been the best team in the league,” said Miller. And the coach is happy that the defenders are creating chances for offensive counterattacks. There’s no better example than the second goal the Eddies scored in last weekend’s 3-0 win over Carolina. A set-piece attempt was cut out, and de Freitas pushed a quick outlet pass up the field, and it set up a two-on-one break for the Eddies. Lance Laing eventually scored on the break.

Keeper Matt VanOekel, who took a lot of the heat for the team’s poor spring goals-against total, said the turnaround has been a team effort.

“I think we’re all just clicking. The team is playing well from the front to the back. We know what our roles are and our responsibilities are. We didn’t have the spring season we wanted to. During that second preseason we worked hard on the defensive shape and getting everyone sharp and ready to go.”

The Eddies will host the Fort Lauderdale Strikers Sunday at Clarke Field; the Eddies beat the Strikers at Clarke in the spring season, then played them to a draw in Florida earlier in the fall season.