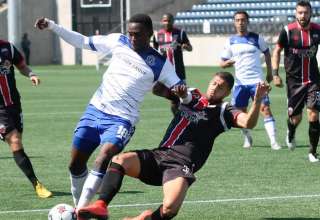 With its 1-0 win over FC Edmonton Sunday in Fort McMurray, the Ottawa Fury extended its unbeaten streak to 11 games. The Fury now has a six-point cushion atop the NASL fall standings.

But what was striking about Sunday’s game is how much Fury coach Marc Dos Santos learned from this past spring’s Amway Canadian Championship loss to the Eddies, then used that knowledge to craft a game plan that neutralized one of the top offences in the league.

In the Canadian Championship defeat over two legs, the Fury was punished time and time again by the Eddies’ speed down the wings and quick counterattacks. On Sunday, Dos Santos came at the Eddies with a 4-1-4-1 formation that took away the wide areas. As well, the visitors made sure to never commit too many players forward, understanding that they couldn’t get burned on the counter.

Yes, the winning goal came deep into second-half injury time, as defender Rafael Alves headed a corner kick off the inside of the post and into the net. But, considering the chances the Fury spurned earlier in the game, it would be hard to argue that the three points weren’t merited.

Asked if the win against the Eddies was a message to the league, Dos Santos stayed the course, saying his team’s goal was to make the post-season — and that’s all.

“If I want to send a message I put it in an envelope and send it in the mail,” he joked.

The Eddies really only forced Ottawa keeper Romuald Peiser to make one real save all game long. That came in the first half, when Dustin Corea, making his NASL debut, cut in off the right wing and lashed a left-footed shot from outside the area,

But the Eddies, for the most part, were simply confounded by the Fury’s two banks of four, laid wide across the field. The two defensive lines took away the ability for the Eddies to go down the sidelines to either Corea or Lance Laing. And, when the Eddies did attempt to pop a ball down the middle, Alves and fellow defender Colin Falvey won the balls in the air.

After the game, FCE coach Colin Miller conceded that his team looked like it was never going to score. He said that the offence was too “predictable.”

And, he even considered taking Laing out of the game. Back from the Gold Cup, the six-goal, four-assist man, was swarmed by Fury defenders every time he touched the ball.

“He’s believing a lot of his publicity,” Miller said at halftime.

The Fury could have been early in the first half. A low cross skipped through a couple of FCE defenders and found the feet of Ottawa forward Oliver Minatel. Just six yards away from goal, he scuffed a shot that went towards the centre of goal, where Eddies keeper Matt VanOekel could collect.

Later in the first half, Tom Heinemann’s quick shot off a corner was heading into the goal. but a touch from Eddies’ midfielder Cristian Raudales took the sting off the attempt and deflected the ball to a thankful VanOekel.

The Fury then had a great chance to take the lead with 20 minutes left. Julian de Guzman had Van Oekel at his mercy. His shot beat the keeper, but FCE sub Daryl Fordyce got his leg in the way and stopped the ball from going in.

Up to injury time, it looked as if FCE’s fortune would allow it to get a draw with Ottawa. Considering that the Fury came into the game in the league lead, Dos Santos said he would have been OK getting just a point.

But, as it did in last week’s win over Carolina, the Fury had one more moment of magic. With just seconds left, Alves was alone in the box and headed the ball downward. There was no Eddie on the far post, so the ball kissed the woodwork and went in.

And, while Dos Santos said that his team doesn’t want to send any messages to the rest of the league — well, he might not be able to help that. The Fury is for real. It’s established itself as a real contender to not only play in the Soccer Bowl, but host it.