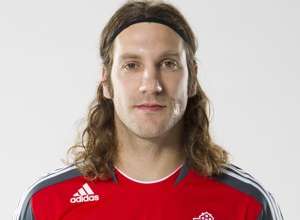 Toronto FC will be without its anchor for not only Saturday’s home opener, but for its CONCACAF Champions League semifinal against Mexican powerhouse Santos Laguna.

The club confirmed Tuesday that Designated Player Torsten Frings will miss the next four to six weeks with a right hamstring strain. Frings had to leave Saturday’s MLS season opener in Seattle just after the 20-minute mark after he extended himself to make a sliding, saving challenge.

Of course, saving Toronto’s defensive bacon is part of Frings’ job description. Throughout the preseason and through the CCL quarter-final upset of the Los Angeles, Frings has been slotted into a sweeper role, acting as cover for Ty Harden and Miguel Aceval in the centre of the Reds’ back line. Frings is also TFC’s best option to move the ball out of the back. With Frings in against Seattle, the Reds were out of step against a very quick Seattle attack; with Frings out of the lineup, the Reds simply looked lost.

Now, coach Aron Winter will need to try and find another way to either bolster the back line. What to do? While rookie Aaron Maund offers more mobility than Harden or Aceval, he is just months removed from college. Veteran defenders Adrian Cann and Dicoy Williams are still on their ways back from injuries.

TFC faces red-hot striker Herculez Gomez and Santos Laguna in the first leg of their CCL semifinal on March 28. The odds would have been long for the Reds to get a result against Santos at home and then, somehow escape Mexico — a place where the Seattle Sounders got ravaged 6-1. Now, those odds have gone from long to astronomical.