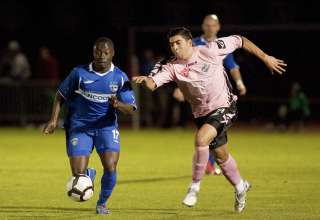 REB in action for the Whitecaps in 2010. PHOTO: BOB FRID/CANADA SOCCER

Canadian striker Randy Edwini-Bonsu had to do some wheeling and dealing with his German club in order to get clearance to play for Canada’s U-23 team in the upcoming Olympic qualifiers, which begin Thursday in Nashville.

In order to stay in the good books with Bundesliga 2. side Eintracht Braunschweig, where Edwini-Bonsu was voted man of the match in the first home game he played for the side, the Canadian striker had to refuse Stephen Hart’s call to play for the senior national team in its Feb. 29 friendly with Armenia. By staying in Germany rather than joining the Canadian national team, Edwini-Bonsu was showing his club that he was willing to trade one event for the other. Braunschweig didn’t want to lose him, but Edwini-Bonsu’s heart was set on playing for Canada in the Olympic qualifiers,

“Everything kind of came together last second for me,” said Edwini-Bonsu Monday from the team’s camp in Florida. “I knew weeks ago that Canada wanted me, but my club wasn’t really interested in letting me go. I didn’t find out till about five days that I was going to be allowed to go. But they didn’t want me to spend the time at a camp, I would be allowed to go for our games, only. And, if we make it to the final, I can’t play in that game, either. I have to get back because we have an important match in Germany.”

Edwini-Bonsu was one of the final members of the team to join the club’s training sessions. He missed most of camp, arriving Saturday. He missed the team’s warm-up game, which it won over Trinidad and Tobago Friday by a 1-0 count, with the Montreal Impact’s Evan James getting the goal. (Canada lost 1-0 to the Fort Lauderdale Strikers on Sunday)

And, for Canada, the semifinal, not the final, is the big game. If Canada wins a semifinal match, it qualifies for the Olympics. So, that’s why Edwini-Bonsu will be OK with having to go home early if Canada makes it that far.

Canadian coach Tony Fonseca will cut down the squad from 24 to 20 on Tuesday. But with Edwini-Bonsu and the Canadian Soccer Association working so hard to make this appearance happen, it would be the shock of shocks to not see the Edmontonian on the roster.

But, even with his club duties limiting the time he has spent in camp, Edwini-Bonsu isn’t concerned about gelling with his teammates.

“There’s only three players here who I have never played with before. I have been playing with some of these guys since I was 15, on various youth teams. It makes it easier, so much better. We all know how each other plays.”

Edwini-Bonsu went to Germany after a stellar summer in the Finnish second division with AC Oulo, where he scored 16 times. He arrived in Oulu after he and the Vancouver Whitecaps mutually agreed to part ways. He is now getting some time in the Braunschweig lineup, now having played four times and getting plaudits for his work. The fact that his club has guarded him so jealously from the Canadian program is a sign of just how much he’s valued in Germany.

“I am very blessed to be playing a key role with the team,” said Edwini-Bonsu. “I have played a few games, got Man of the Match in my first home game, what a great honour that was. I know a lot of Canadian fans are excited about me. But I have to look at myself as a player who is still developing, that I have a lot of hard work to do.”

And he is well aware of the headlines generated by another Canadian in the Bundesliga 2. Olivier Occean has scored 15 times this season and has led SpVgg Greuther Furth to the top of the table — and dreaming of playing the likes of Bayern Munich, Borussia Dortmund and Schalke next season.

“It’s a sign that Canadian soccer has definitely improved,” said Edwini-Bonsu. “There are a lot of good players. And Olivier is doing so well, we hear a lot about it, but he is about 30 years old. I am just 21 and I am still developing.”

Because he played through the summer in Finland and then went to Germany, Edwini-Bonsu is looking forward to having some down time in May in Edmonton — where he can get some needed rest. Look for him at an FC Edmonton match — as he has many friends on the squad, and even contemplated joining the Eddies last spring after he left the ‘Caps.

“I could have played there last season, (FCE right back and Edmonton native) Antonio Rago tried to convince me about it. I thought about it, but I had already played at that level (Div.-2 with the Whitecaps) for so many years. But I did go to a couple of games last season.”