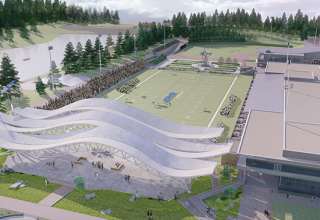 On Wednesday, FC Edmonton confirmed that the dates on which it will play its two Fort McMurray “home” games.

As had been expected, the Eddies’ fall season opener — kicking off just hours before the Women’s World Cup final in Vancouver — will go July 5 in Fort Mac. The NASL champion San Antonio Scorpions will provide the opposition. The Eddies will return to the heart of the oil sands on Aug. 2 for a match against the Ottawa Fury.

The team had announced last season that two games would be coming to Fort McMurray. But, with the announced dates comes a real test for the Edmonton market.

Because of the Women’s World Cup, FC Edmonton has to clear out of Clarke Stadium — which is an official practice facility for the teams — by the end of May. The team’s final home game of the spring season goes on May 24.

The next time Edmonton is at “home” is the July 5 Fort Mac game. It then goes out on a three-game road trip. FC Edmonton is finally back at Clarke July 26, but then is back in Fort McMurray the next weekend (Aug. 2).

So, after the May 24 home game, FC Edmonton will only have one home game at Clarke Stadium (July 26) before the second week of August. That’s a heck of a long time to be out of the eye of the local media and soccer community.

The Fort McMurray games will be the northernmost fully professional matches ever played in North America.