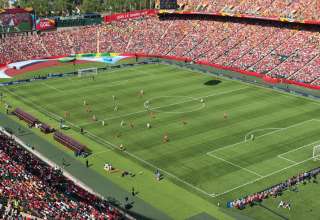 Remember when we all thought the United bid for the 2026 World Cup was a shoo-in?

Well, the bid is bleeding, badly. On Thursday, a press release went out stating that Canadian Minister of Infrastructure and Communities Amarjeet Sohi and Canadian Soccer President Steven Reed will be at Edmonton’s Commonwealth Stadium to make a major “sports announcement.” But, just an hour or so after that release went out, came news that the Alberta government would not financially support Edmonton’s quest to become a World Cup 2026 host city.

This comes on the heels of other bad news for the World Cup bid. Vancouver was removed from the list of potential host cities on Wednesday, after the British Columbia government said that it didn’t get assurances from FIFA that taxpayers in that province wouldn’t be subjected to unreasonable financial risk to host part of the tournament. On the American side, Chicago and Minneapolis dropped out for similar reasons.

Edmonton, Montreal and Toronto are the three Canadian cities on the World Cup bid. Canada, the United States and Mexico are looking to share the 2026 World Cup, with the Americans getting 60 of the 80 games, and Canada and Mexico getting 10 each. Morocco is the only other bidder for the 2026 games.

But there are differences between the funding rejections from B.C. and Alberta. Unlike Vancouver, where BC Place is provincially controlled, Commonwealth Stadium is run by the City of Edmonton. If Sohi’s announcement tomorrow does include some sort of federal support, it could (stress “could”) help Edmonton cope with the fact that money won’t be coming from the province. As well, Alberta must have an election on or before May, 2019. Host cities will be chosen after that date. So, if there is a change in the political landscape, or even the political winds, Edmonton could hang on and hope for a new deal.

But the timing of Thursday’s two announcements was bizarre, to say the least.

And the line of questioning for Reed and Sohi just got a bit more uncomfortable.