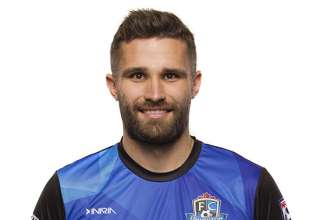 For Adam Straith, Saturday’s FC Edmonton game is going to be very special.

As a member of the Canadian national side, he’s played on this country’s soil many times. But Saturday’s home opener against the Jacksonville Armada will mark the first time he’s been part of a professional club match played in his home and native land. His family is making the trip from Victoria to Edmonton to take in the game.

“I’ve been looking forward for a few weeks to get here and play in Canada,” Straith said after Thursday’s training session at Clarke Field. “It will be my first league game in Canada, it’s special for me. Looking forward to getting in front of our Canadian fans.”

Straith signed a spring-season deal with the Eddies in the offseason, and he got a real baptism of fire when it comes to what life is like in the NASL. Not only did the Eddies have to play an afternoon game in sweltering conditions, they had a nightmare of a travel (mis)adventure getting back to Edmonton. Severe weather in Atlanta — which is the major air hub for the American south — affected flights throughout Florida. So, the Eddies had to split up and find alternate routes home. Some were stuck in Atlanta, some went to Toronto and routed back to Edmonton from there. Another group, which included coach Colin Miller, were flown out to San Francisco (that’s right, they were flown all the way out to the Pacific Coast) and had to spend the night at the airport.

Ledgerwood said that, with all the delays, it amounted to a 35-hour travel day for his group.

“I was told that was probably our worst travel schedule,” said Straith.

“It’s a bit too early for me to give a full review of the league, but it was obviously not an easy game,” said Straith of his first match. “In the heat, down in Florida, it never makes it easy. I’ve played down there before, but it’s different when you’re in a climate like this (Edmonton) for most of the preseason and have to go down there. That was a challenge. I don’t think we played as a well as we can, or that we showed in the preseason.”

The weather is expected to be just above the freezing mark on Saturday night, so outside of Canadian Drew Beckie, there could be some temperature shocks for the Armada players.

“I think it becomes a six-pointer already, because we played them last week and we don’t want to have a gap to develop between ourselves Jacksonville,” Miller said. “With a win on Saturday we can move up to the middle of the table. We’re at home, we’ve played well at home, touch wood, consistently we’ve been good. It’s a difficult venue for teams to come and play against us. So, we want to be on the front foot. I want us to press the ball a little bit higher — we’ve worked on it again this morning. We know how Jacksonville will play, they haven’t changed very much, I don’t expect them to change very much for this coming weekend. There wasn’t much between the two teams last week, there was an error in the middle of the park and we got punished for that.”

Miller ended his press availability with a message for the Edmonton Oilers and their coach, Todd McLellan. The Oilers have made the NHL playoffs for the first time since they appeared in the 2006 Stanley Cup final, where they lost in seven games to the Carolina Hurricanes.
“I just wanted to compliment the Edmonton Oilers on qualifying for the playoffs,” Miller said. “I know how much the sport means to the city, and I know how much work has gone on to make them a playoff-bound team. Well done to Todd. I don’t know Todd, but I could see the work that he was doing and how the team was improving — not being a hockey guy. But the sense of excitement in the city for the Oilers, you can see that. But I hope we don’t forget about the Eddies.”