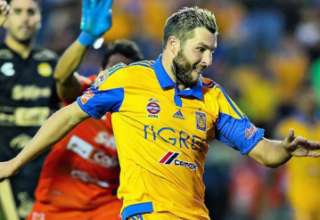 When you’re an underdog, facing a team that has a huge talent advantage, you know this. You are going to get outchanced. You aren’t going to have the lion’s share of the possession. What you need to do — to have any chance at all — is understand that if a clear scoring opportunity falls to your feet, you have to take advantage of it.

After the Whitecaps lost 2-1 Wednesday to Mexican powerhouse Tigres at BC Place Wednesday night — dropping their CONCACAF Champions League 4-1 on aggregate — you could very rightly say it could have been worse. If not for some poor finishing early on from Tigres, if not for a series of inspired second-half saves from Vancouver keeper David Ousted, it could have been 6-1 or 7-1.

But, there’s another view, as well. With the Whitecaps trailing 2-0 after the first leg, Brek Shea gave the home side a wonder start, pouncing on an abysmal clearing attempt from Tigres keeper Nahuel Guzman and smashing a half-volley into the net. That stood all the way to halftime.

So, the Caps came out of the break trailing just 2-1 on aggregate, and then began the second half with another chance. A ball was slipped into the box on a clever-back heel, and Cristian Techera had a chance to equalize right in front of the Tigres goal. But, the ball got caught in his feet, he couldn’t muster the deft touch needed to take advantage of the chance. Eventually the ball found its way to Whitecap Christian Bolanos, who had a decent shot on goal, but it came from such a poor angle that you’d expect any decent keeper to save the shot — and that’s what Guzman did.

Really, the chance died with Techera — and the Whitecaps let Tigres off the hook, knowing that it wasn’t going to be the kind of night where more chances were going to flow.

After Andre-Pierre Gignac’s fantastic strike from outside the box and Damian Alvarez’s insurance goal after about 10 straight minutes of intense Tigres pressure, this was all over.

But, really, the night was lost on Techera’s heavy-footed first touch.