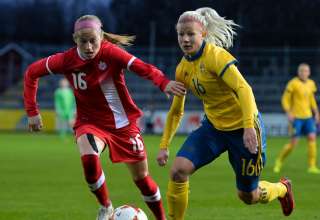 The goal that gave the Canadian women’s national team a 1-o win in Sweden Thursday was a perfect example of the three-pronged attempt that coach John Herdman will have at his disposal over the next few years.

The Olympic bronze medallists got one over on the Olympic silver medallists thanks to some deft interplay between Deanne Rose, Christine Sinclair and Janine Beckie. Rose got the ball on the left side, and played a smart ball to the top of the Swedish penalty area to Sinclair. Then, Sinclair was able to send a bouncing ball through the centre of the Swedish defence, where Beckie dashed into the clear. Beckie’s clever finish inside the post was her third national-team goal of 2017, her 15th overall.

Sinclair is the No. 2 all-time leading goal-scorer in international women’s soccer, but with the young blood of Rose and Beckie surrounding her, she’s transitioned into a provider, working just behind the forward line to open up defensive lines as she did on Thursday. Beckie has already moved up to ninth on Canada’s all-time scoring list, and she shows real composure to carry the torch and become Canada’s next big finisher (if she isn’t, already). And Rose offers pace and the ability to take on defenders one-on-one, the kind of wild-card offensive talent who can either finish chances or begin attacks.

It’s a three headed monster — and it kinda reminds you of a hockey line, doesn’t it? Maybe Beckie, Sinclair and Rose need a snazzy collective nickname, like we give to the best lines in hockey.

“It was a real team performance tonight,” Herdman was quoted by Canada Soccer after the match.  “It was arguably some of the best possession play I’ve seen from our team.  We’ve been working on that as a team and have made it our intent to move forward in that space.  I’m proud of what they put out there tonight against a really physical Sweden team.”

Canada’s next jaunt on this European mini-tour is a battle against the FIFA No. 1-ranked Germans. And, while we’re a long way off from a Women’s World Cup or the next Olympics, Canada needs to use this time to see if it can cement itself as a real top-tier side, that is regularly mentioned in the same breath as the Swedes, Germans and Americans.