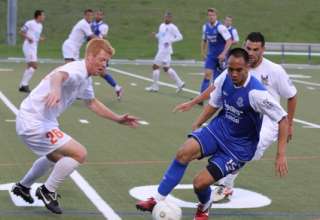 FC Edmonton’s 1-0 loss to the Carolina RailHawks was made all the more painful due to a serious injury suffered by keeper Lance Parker.

Parker was carried off a stretcher, right arm immobilized, to a waiting ambulance on the sidelines after colliding with Carolina striker Etienne Barbara and falling awkwardly to the hard Foote Field artificial surface.

Early word from the club is that Parker has a compound fracture of his right arm.

“It was a little gruesome,” said FC Edmonton defender Paul Hamilton. “It’s tough to see a teammate go down like that.”

Parker, who was named Defensive Player of the Week earlier this season when he backstopped FCE to a win in Atlanta and a draw in Tampa, had drawn back in because Rein Baart was serving his second red-card suspension of the season.

No. 3 keeper Jaswinder Gill was nursing a bad back and wasn’t available, so Justin Ammar, signed to an amateur contract before the game, was pressed into service.

FC Edmonton plays Puerto Rico Wednesday and Baart will be available to start, but it’s unclear who will back up.

“I think we played really well,” said Hamilton, “We took away their strengths.”

FC Edmonton coach Harry Sinkgraven made some major alterations to his starting XI, as the club moved to a shape closer to a 4-5-1 rather than a 4-3-3, something it has found necessary on the tiny-but-quick Foote Field surface. Alex Surprenant reclaimed his starting role at left back; John Jonke moved into the centre of the backline, as Dutch veteran Paul Matthijs’ various aches and pains didn’t allow him to go. Paul Craig was replaced in the centre of the attack by veteran Dan Antoniuk.

Craig later came on as a sub.

Kyle Yamada couldn’t go because of an ankle injury suffered two games ago, so Shawn Chin continued on the left side of the attack.

And Parker got the start in goal thanks to the red card Rein Baart received in Saturday’s loss in Montreal.

Carolina created some chances in the first half; the best coming when former Real Salt Lake striker Pablo Campos headed an open header wide of goal.

FC Edmonton’s Kyle Porter carved out an excellent chance, coming in off the right wing and using the defender as a screen, but Carolina keeper Brad Knighton did well to get his hands to the ball even though he saw it late.

But Carolina kept coming at FCE (5-4-1) in the second half — as the home team looked to soak up the pressure and try to hit back at league leaders on the counter.

Yet, the hard work was undone by the hard home turf. Barbara and Jonke were occupying each other as the ball bounced by them. The ball spun away from FCE’s Chris Kooy and Alex Surprenant, allowing Carolina’s Matt Watson to run on to it and finish on the volley.

Barbara later had the ball in the back of the net. But, he was dismayed when, after the referee and linesmen conferred, the goal was waved off. A whistle had gone before Barbara scored, but the linesman’s flag stayed down. A fan had blown the whistle, and was later warned by the referee to not do that again. To add to the confusion, the referee restarted play with a drop ball — suggesting no foul or infringement on the play — rather than giving FCE a free kick.

Or allowing the goal.

The confusion looked to take Carolina out of their rhythm, as the pressure subsided as the second half wound down.

FCE had one good chance after the injury, which added seven minutes of time to the second half. Michael Cox fought through a foul and ran towards goal, only to have the ref decide not to play the advantage even though he had a clear sight of Knighton.