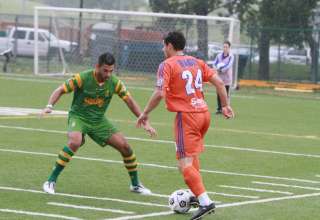 Antonio Rago vs. Rowdies in the rain.

The boos at the final whistle from the 1,688 fans who had braved a driving rainstorm to sit in the Clarke Stadium stands were loud and clear.

Despite being up a man for an hour, FC Edmonton couldn’t score — and, to make matters worse for the home team, the Eddies were caught at the back late in the game, as Luke Mulholland’s goal gave the Tampa Bay Rowdies a 1-0 win . The loss ensures that the NASL’s lone Canadian team remains rooted in the league cellar, a point behind the Atlanta Silverbacks.

FCE created three fantastic chances to open the scoring — but, ironically, they all came before reigning NASL Player of the Month Tsuyoshi Yoshitake received a straight red for landing on cleats-first on FCE defender Kevin Hatchi.

After the Eddies went up a man, the chances that were created were basically some long-range, speculative shots in the rain. In fact, the Rowdies didn’t change their shape, because FCE didn’t bring enough players forward to trouble them. And, the winning goal came when the Rowdies created a three-on-one break, despite being down a man.

“I heard their coach (Ricky Hill) telling theme in the last five minutes to press in our end,” said FCE’s Chris Kooy, who was moved from the holding midfield slot to take Paul Hamilton’s spot in central defence. “He wanted them to press higher.”

Kooy moved to the back so Bryan Arguez, acquired on loan from the Montreal Impact, could get his first NASL start of the season. And, to make room for Kooy, coach Harry Sinkgraven — in what has to be considered a jaw-dropping move — moved a healthy Paul Hamilton to the bench.

Early in the match, Tampa pushed the Eddies back on their heels, with fullback Takuya Yamada sending side-footed deflection of a low corner kick just wide of goal.

But, with the Rowdies sending numbers forward, the Eddies tried to play long balls over the top — an unusual tactic for a team that usually prides itself on playing a midfield possession game. The tactic looked like it caught the Rowdies by surprise, and forwards Yashir Pinto and Michael Cox were each able to get decent chances.

After Shaun Saiko had skipped through the Rowdies defence, he slotted a ball back to the top of the box that Pinto turned and fired towards goal, forcing Tampa keeper Jeff Attinella into a diving, spectacular stop.

After a ball from Kenny Caceros sprung Saiko behind the Rowdies backline, Attinella charged out and got his hand out to block the Eddies’ midfielder’s attempt to chip the keeper.

Then, Saiko played a low ball the Cox directed towards goal, forcing Attinella to dive to the drenched turf to stop.

“We had some chances, but if you don’t score it will kill you in the end,” said Sinkgraven.

But the Eddies looked to lose their forward momentum after they went up a man. Hatchi slid to get to a ball, and Yoshitake, who looked like he was trying to leap over the prone defender, landed awkwardly. His cleats hit Hatchi in the chest, and the official deemed it to be an intentional stamp, and sent the Japanese playmaker off the field.

After the card, Tampa had the last good chance of the first hand, with a stinging free kick from Mulholland forcing FCE keeper John Smits to fingertip-save the ball over the bar.

Smits started his second consecutive match as No. 1 Lance Parker continues to nurse a groin problem.

In the second half, Tampa kept pressing forward, even though it was down a man. And, the Eddies often had Cox and Pinto isolated up front, with little support. A lot of hit-and-hope crosses were handled by the Rowdies.

In fact, the Rowdies could have got the winner a little earlier in the second half. Ex-Eddie Dan Antoniuk toe-poked a shot wide after a low ball into the area caused Smits and his defenders all sorts of problems.

But the Rowdies got their deserved winner three minutes from time. A through ball caught the Eddies short at the back. Mike Ambersley made a good cross that Mulholland was able to direct pass a helpless Smits.

“If you lose three minutes before end of the game, it’s a big disappointment,” said Sinkgraven.

For the fifth time in the last six games, the Eddies have been held off the scoresheet. The team has been trying to bring in a Brazilian striker on trial, but he isn’t in the country — and there are outstanding paperwork issues.

Next week, the Eddies go to Atlanta — to try and escape the league basement.