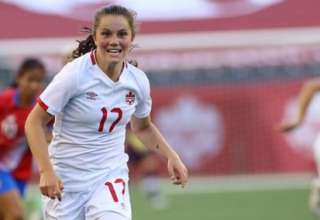 Janine Beckie figured in on Canada’s first two goals of its 3-1 win over Costa Rica Thursday night in Winnipeg, though she didn’t end up on the scoresheet.

Beckie was standing on the doorstep of the Costa Rican net as Jessie Fleming scored the opener just three minutes in. And she drew the second-half penalty that led to Christine Sinclair’s spot-kick conversion.

In the spirit of the friendly, the Costa Ricans didn’t offer too many complaints when Fleming cut in from the wing and lashed a shot into the goal. The linesman’s flag stayed down, even though Beckie was in an offside position, in front of keeper Noelia Bermudez. Beckie never touched the ball, and it was clear that she tried — successfully – to get out of the path of the shot. But, there are likely more than a few officials in the world who would have flagged Beckie for being an active player — and not allowed the goal to stand.

That’s the problem with the offside rule; it has become subjective when it comes to linesmen needing to determine if the offending players are active or not. Beckie doesn’t touch the ball, but she is awfully close to the Costa Rican keeper as the shot is launched. Sometimes, I wonder if the game would not be better off if we went back to a rule that didn’t allow for interpretation — that if any player is offside, the play is whistled dead.

Instead the linesman made the split-second decision that Beckie was passive, not active, and the goal was good.

The second incident between Beckie and Bermudez was more clear-cut. Beckie came into the box with the ball, and lost control of it just before Bermudez made contact with her. Bermudez’s challenge was clumsy and, worst of all, she didn’t need to do it. Beckie wasn’t going to get a shot on goal, the ball was already gone. But the Costa Rican keeper made the decision to come out awfully late, and was punished for her tardy arrival on the scene.

Costa Rica pulled a goal back thanks to some unnecessary charity from the hosts. Keeper Stephanie Labbe made an ill-advised short pass to Desiree Scott. Scott’s touch was heavy, and Costa Rica’s Raquel Rodriguez took the ball. Her attempt hit the post, but Diana Saenz banged in the rebound.

Adriana Leon scored in injury time off a goalmouth scramble to make it 3-1, and the 14,434 in attendance in Winnipeg had reason to celebrate.