May 16, 2022
9 New Articles
Home NASL & USL FC Edmonton FCE coach Miller: “I should have been arrested, I was that angry” after handball call 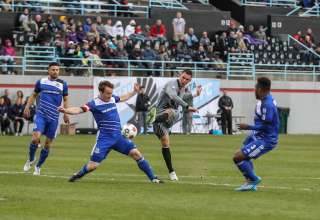 The Eddies overhauled their attack in the off-season, but, after three NASL matches and one Voyageurs Cup game, the 2014 stats look an awful lot like last year.

After the Eddies fell 1-0 on the road to Minnesota United FC Saturday night, the ledger looks like this; through three league games, FC Edmonton has scored just one goal, and allowed just three. And don’t forget that the Eddies played the Ottawa Fury to a 0-0 draw in the nation’s capital last Wednesday in the first leg of their Amway Canadian Championship preliminary round.

So, the book on FCE early in the 2014 season looks a lot like 2013; awfully hard to score on ‘em, but they don’t get a lot of offensive results, either.

Coach Colin Miller said after the Minnesota match that he felt his team played some very good soccer on Saturday, that the team deserved better, but he also admitted “that I’d rather have the team play horrendous and win than play some good football and lose.”

I the column that matters, points earned, FCE has just one after three league games. Minnesota already has nine points. With six weeks left in the NASL spring season schedule, it’s pretty tough to see the Eddies leapfrogging the field and making up eight points on the leaders.

So, for FCE, it needs to be all about the Cup; and what’s concerning for FCE supporters ahead of Wednesday’s Amway Canadian Championship preliminary round second leg is that the Fury got four goals at home to Carolina on Saturday. Striker Oliver Minatel got a hat trick, giving the Brazilian three times as many goals as FCE as a team this season. Philippe Davies got the other marker for Ottawa in its 4-0 win over the RailHawks.
The Fury has found a groove; while the Eddies need to find one.

Minnesota has three wins in three games, and now stands alone at the top of the NASL standings. The key moment came in the 68th minute of the match, when Marko Aleksic, the teenager added to the FCE roster at the start of the season, was found guilty of blocking a Simone Bracalello shot with his hand. Bracalello beat FC Edmonton keeper John Smits with a low drive inside the left post on the penalty kick.

Aleksic had slid to block Bracalello’s initial attempt, and the ball caught him on the arm. He was in the middle of his slide when the ball hit his arm.

“In my life, I’ve never said so many bad words in such a short period of time. I should have been arrested, I was that angry. I said it after the Ottawa game and I will say it again, the standard of the officiating has got to be better. I have a lot of respect for Minnesota. They’ve spent some money, they have a very good team, very well coached. And the referee was bad for both sides. But, after the game, the guys got together and gave Marko a big round of applause. That shows you the unity we have on this squad. Marko’s just 17, and I thought he came in and played very well.”

Now, to be a bit of a devil’s advocate for FC Edmonton (or maybe a lot of a devil’s advocate), the game could have been very different had referee Younes Marrakchi decided to not to show leniency to Minnesota United defender Tiago Calvano. In the fourth minute, FCE strike Frank Jonke got behind the defence, and was fouled from behind by Calvano. FCE players expected Calvano to see a red for the foul but, after consulting with the linesman, Calvano decided to show yellow instead — a decision which incensed Jonke and his teammates.

“For me, the call on Frank is a stone-wall red card,” said Miller. “There is not chance of a second defender getting over in time.”

Now, it’s easy to get in the referee’s head in this case; it’s Minnesota’s home opener, and you don’t want to spoil the game in minute four.

Think back a couple of weeks; when FCE went to Tampa for the Rowdies’ home opener. Tampa Bay keeper Matt Pickens should have been sent off for fouling Jonke in the box; a penalty was awarded, the keeper was the last man back. But there was no card in that case, either.

Currently, the Canadian Soccer Association handles the refereeing assignments for games in Canada, while PRO handles the assignments for games on American soil. But, for the sake of optics, it would look better on all parties if the Canadian officials were occasionally sent down to the U.S. to do games there while the American officials were sent to Canada to do games in Ottawa and Edmonton. It’s something the NASL should look into for the sake of integrity.

To be fair, FCE’s Michael Nonni deserved to go off in the 68th minute. He was already on a yellow when he came in late on Minnesota’s Miguel Ibarra. But Marrakchi chose to warn Nonni rather than issue the second yellow.

From the start, FCE coach Miller opted to go with the two-striker attack, using both Jonke and Tomi Ameobi — the only Eddie to find the net so far this season — up front. That changed from the one-attacker set Miller had been using from the start of matches.

And the Eddies did create chances. Not only was there the controversial call on Calvano but, later in the first half, Daryl Fordyce got the ball after FCE had moved the ball well in Minnesota’s penalty area and then blasted a low shot that keeper Matt Van Oekel could only deflect. But the deflection took the ball into the air, and the ball was headed off the line.

Aleksic came in at halftime to replace Kareem Moses in the centre of defence, a move that would have a huge impact on the game. Moses had to leave with a hamstring problem.

Minnesota strengthened as FCE, playing its third game in a week, looked to wane as the game went on. Before Bracalello’s goal, Minnesota had two very good chances to open the scoring. Floyd Franks, known more for his tackling than his scoring ability, had a clear shot from just six yards out — but he scuffed at the ball and a slow roller went right into the arms of a grateful John Smits in the Edmonton goal. Then, Smits was called to make a sprawling save on a Cristiano Dias header off a corner kick.

The 0-2-1 start to the NASL season, with just that one goal scored, now puts incredible pressure on Miller and his players to beat Ottawa in Wednesday’s ACC second leg. The game is at Clarke Stadium — and a loss at home to Ottawa (or any draw that isn’t 0-0) would send the Fury through to face the Montreal Impact in the next leg. Not getting through to the next round would put huge pressure on the club; the spring title is almost out of reach (already) and stumbling at the first leg of the domestic Cup competition could make for a very long spring in the Alberta capital.

Miller hopes that central defender Mallan Roberts, out since the first week of the season with a hamstring problem, can get back into the lineup for Wednesday, as Moses’s hamstring issue creates a new headache. Nonni is also nursing a hamstring problem.