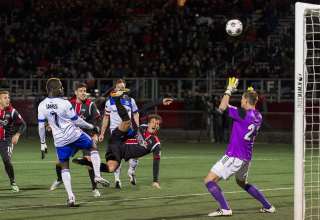 Call it cagey. Call it frustrating. FC Edmonton and the Ottawa Fury finished the first leg of their Amway Canadian Championship preliminary round with a 0-0 draw.

But the Eddies could have snatched a precious road goal in injury time. In a game that had very few decent chances, FCE had a wonderful chance to steal the game at the death. Striker Frank Jonke got the ball in the middle of the box after Horace James was able to slide and make a pass after recovering his own blocked shot. But Ottawa keeper Devala Gorrick was able to make a sliding stop.

Still, Eddies coach Colin Miller feels the Eddies are “in the driver’s seat” going into next week’s second leg at Clarke Stadium. After Saturday’s disappointing 1-0 loss to the NASL champion Cosmos in league play, Miller said that he felt, at times, the Eddies played their best soccer of the season, even if it didn’t show on the scoresheet.

There were a few notable individual performances from players on both teams, despite the 0-0 scoreline.

On the Ottawa side, kudos should go to central defender Drew Beckie, who stood strong when facing Eddies’ striker Tomi Ameobi and then Jonke, who came on a sub. Richie Ryan was also a handful in midfield, disrupting several FCE attacks and moving the ball well in his own right.

Miller had raves for Nonni.

“Michael has been a real success story. At one point, I was contemplating releasing him last year. To his credit, he’s worked very hard to what we’ve tried to get across to him in training. I’m absolutely delighted for him.”

Ottawa’s best second-half chance came after a free kick was launched into the FCE penalty area. After it hit a couple of players in the box, Ottawa’s Tony Donatelli got parallel to the ground to launch a shot towards goal. It hit a white FC Edmonton shirt in the box, then fell for Fury defender Mason Trafford, who also got vertical to get his foot on the ball. The shot went just over the bar.

In the first half, the Fury’s Philippe Davies had the best two chances, flicking a header over the bar early in the match and then forcing FCE keeper John Smits into a diving stop in the 14th.

But really, outside of the chances described, there wasn’t much else launched towards either goal. There wasn’t a lot of room in midfield, and it was difficult for either side to sustain possession. Ottawa coach Marc Dos Santos felt that the Fury did well in the first 25 minutes, changing the points of attack and creating a lot of one-v-one situations on the wings. But as the game went on, FCE and its vaunted defence firmed up, and the Fury did little to trouble Smits as the game went on.

Now, FCE knows that the tie is all even going home for next Wednesday’s second leg. But the Eddies also know that, by not scoring a road goal, that any kind of draw that isn’t 0-0 will send the Fury through. FCE is famous for playing 1-1 draws, and that score next week would be good enough for the Fury.

Also troubling for the Eddies is news that Lance Laing, one of the best left backs in NASL, picked up an injury Wednesday. Laing has a hamstring problem, but told the coach he should be OK to play in Minnesota Saturday, before the Eddies head back home to prepare for the second leg.

Mike Banner, the former Chicago Fire midfielder who joined the Eddies this season, has yet to play this season due to an injury suffered in preseason. Miller had planned for Banner to play 45 minutes against the Fury, but Banner felt a tweak on the last day of training before the Eddies left for the nation’s capital. He was left at home and Miller is getting updates on the player.

As for the Fury, Miller said that the opponents sorely missed striker Tom Heinemann, who as a member of the Whitecaps scored against the Eddies last year in ACC play. As well, the loss of centre back Omar Jarun hurt the Ottawa cause, though Beckie did admirably.

“They’re a first year franchise and finding their way,” Miller said. “They are missing key players, too. Big Tom Heinemann is a big loss. Omar Jarun is a big, physical player. They work hard. But we’re in the driver’s seat, I think. If fans are noisy for us as they were last Saturday, I am sure it will be an exciting game. I think we are in good shape.”