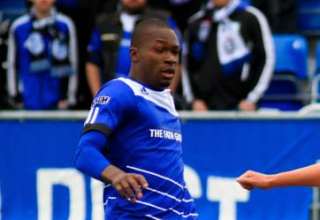 The Canadian Soccer Association has announced that FC Edmonton defender Mallan Roberts — who got his citizenship earlier this year — has been called up the men’s national team ahead of their June 11 and 16 World Cup qualifiers against Dominica.

Roberts and his father, Charles, came to Canada from Sierra Leone as refugees, and the quest for citizenship was a long, arduous process. While waiting for his paperwork, Roberts couldn’t travel to Australia to visit his mother and see his extended family there.

Roberts has started every NASL game this season for FC Edmonton at centre back.

Roberts will replace Dejan Jakovic, who is injured.

Two years ago, when FCE coach Colin Miller was also the caretaker boss of the Canadian national side, he wanted to give Roberts the chance to play in friendlies, but couldn’t because the citizenship paperwork hadn’t come through.

“It’s absolutely fabulous about Mallan being drafted into the Canadian squad,” Miller said. “It’s a testament to the progress the young man has made. He has had the opportunity to play beside [FC Edmonton team captain] Albert Watson who has had a big influence on him and he’s also developed in his own right. We’re proud of Mallan. Hopefully he can make a favourable impression to Benito [Floro, Canadian national team head coach].”

Like Lance Laing, who is off to play with Jamaica at the Gold Cup, Roberts will miss FCE’s final game of the spring season.