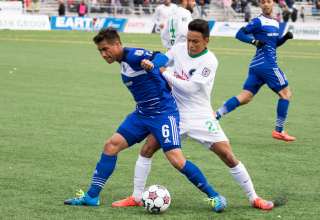 After the Canadian men’s national team faces Honduras at BC Place on Nov. 13, it will travel to oh-so-friendly Central America for a Nov. 17 date against El Salvador.

And, there’s a chance that midfielder Dustin Corea, who earns his weekly wages as a member of FC Edmonton, will be part of the El Savadoran XI that will face Canada. He got the call to join his national side earlier this week.

Corea will join the El Salvador national side that’s in the midst of turmoil. Complaints about player wages has seen players turn down national-side invites; it’s been called a players’ strike, even though, in terms of being called up to represent one’s country, it’s a stretch to use that term.

Corea, responding via e-mail as he’s en route to join his national side, wouldn’t directly comment on the politics of the El Salvador team.

“I’ve heard of it, but it’s not in my power to speak of this,” he wrote. “I’m more than certain that the team will be united. We have to be in order to succeed in these qualifying games, and I believe we are missing some very good talent but I am sure that the guys that substitute them will be just as hungry and good.”

While Canada will open up this CONCACAF group stage of World Cup qualifying at home to Honduras, El Salvador travels to Mexico. Getting any points out of Mexico would be, well, the dream of dreams. So, El Salvador’s players know they need to get the maximum points out of their home matches. For Corea, he stated the fact he’ll play against Canada won’t play large in his mind.

“I feel the same as if I was playing any other team. If anything I have to play harder because it is a home game for us and we need all the home game points.”

But, Corea is thankful for the chance his Canadian club has offered him. He knows that without the significant playing time he earned with the Eddies, he would not have been recalled to his national side. After signing between the spring and fall seasons, Corea earned a regular place in the FCE starting XI; he played as a left-footed right winger, and would often shuffle into the middle of the field to create scoring chances.

“Playing on a constant basis was key for me to get back into the national team and my performance with FC Edmonton showed what I am capable of doing,” he wrote.

The top two teams out of Mexico, Honduras, El Salvador and Canada will go on to the hex. Canadian national-team coach Benito Floro has already conceded that Mexico will get one of those spots, so it will be between the other three for that other position.